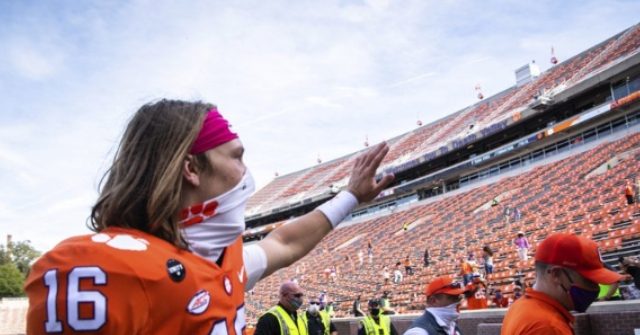 Clemson quarterback Trevor Lawrence has tested positive for COVID-19, putting into doubt whether the face of college football will be available to play the top-ranked Tigers’ biggest game of the season.

Clemson coach Dabo Swinney said in a statement released by the school Thursday night that Lawrence is in isolation with mild symptoms.

Swinney said Lawrence would miss Clemson’s game Saturday against Boston College. The Tigers are scheduled to play No. 4 Notre Dame in South Bend, Indiana, on Nov. 7.

Individuals who test positive for COVID-19 must isolate for a minimum of 10 days.

The junior from Georgia is a leading contender for the Heisman Trophy and potentially the top overall pick in next year’s NFL draft. He led the Tigers (6-0) to a national championship as a freshman and back to the College Football playoff championship game last season. Clemson’s loss to LSU in the title game was the first — and still only — game the Tigers have lost in Lawrence’s 32 career starts.