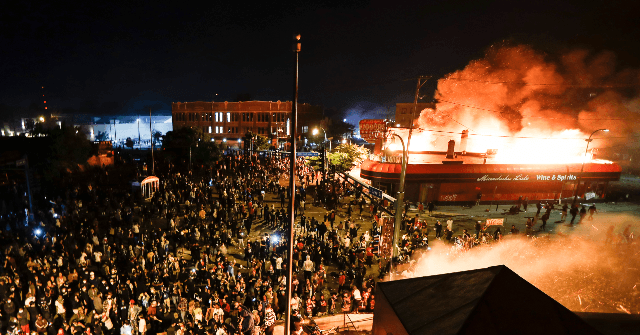 A leaked confidential document obtained by Breitbart News reveals that a coalition of left-wing groups in Minnesota, fearing a possible Trump win, is preparing for post-election mass unrest while planning to execute wide scale “strategic disruption.”

Led by TakeAction Minnesota, described as a “hub for Minnesota’s progressive movement,” the groups warn of a need for mass mobilization in a recently leaked highly confidential document circulating among the group’s leadership and intended as a prep guide for the coming weeks.

“We believe that regardless of the strength of the Minnesota election system, mass mobilization will and must happen in Minnesota to defend democracy,” the leaked document reads.

“We expect that this mobilization will create space and opportunity for unrest, primarily in Minneapolis. In this context, the situation could rapidly spiral beyond control depending on the nature of the unrest and the State’s reaction.”

In an effort to shift responsibility for violence to others, the groups point to the right, as well as the Minneapolis Police Department (MPD), for the possibility of inciting or enabling violence, for which they must be prepared.

“The possibility of right-wing violence is real, as is the possibility of MPD inciting or enabling violence,” the document warns, adding that the MPD is “either disengaged or instigating tension” during and since the “uprising” immediately following the murder of George Floyd.”

“It is unclear who the MPD is accountable and answering to,” the groups state.

TakeAction Minnesota was at the forefront of the protest movement sparked by the killing of Gorge Floyd, demanding the MPD be dismantled and helping spark the nationwide demands to “defund the police.” Following pressure from the group, a veto-proof majority of the City Council pledged to dismantle the Police Department, while promising to create a new system of public safety in the city that is underway.

The groups anticipate outcomes ranging from inconclusive results, to a refusal of Trump to accept results (if defeated), to himself suspected of election interference (if he wins).

In the event of President Trump’s re-election, the document calls for “strategic disruption” through mobilizing masses to take to the streets.

TakeAction Minnesota, a nonprofit founded in 2006, is a coalition of 20 different organizations, including labor unions and advocacy groups for left-wing causes, and claims hundreds of thousands of members ready to be activated. It describes itself as a “multi-racial people’s organization building power for a government and economy that works for all of us.”

Noting that Minnesota elections are administered mainly at the county level and as such “much of the process will be in the hands of local county officials,” the document goes on to warn that “such officials may be unfriendly or open to coercion by right-wing violence.”

The document then notes a supposed rise in “white nationalist organization and activity” which has brought “multiple nights of infiltrator terror that targeted Black and brown business corridors and nearby neighborhoods” during “the most recent uprisings.”

“It is possible Black churches may also become a target. St. Cloud and Duluth are also two cities to keep in mind given their proximity to large white nationalist geographies and demographic and ideological make-up,” the document warns. “Additionally, we know of white nationalist infiltration and organization at Greater Minnesota universities.”

The document also calls to support preparation in communities “most at-risk of white nationalist attack.”

“We expect any mass protest – no matter how positive – to create cover for further not pointed, unstrategic, infiltrated civil unrest and property damage in Minneapolis,” the document continues.

The groups point to their “transformative” experience organizing during the George Floyd riots — the second most destructive in U.S. history — as a model for future rapid organization.

“Minneapolis and St. Paul had a powerful experience of community care and safety during the uprising,” it reads. “Folks rapidly organized neighborhood patrols, mutual aid networks and emergency response teams to keep the community safe.”

In a section titled “Theory of What Will Happen,” the document “predicts” election contesting in Minnesota and/or other states and describes the groups’ role to “support efforts by the State (led by the Governor, Attorney General and Secretary of State) to resolve the contest rapidly and to prevent right-wing vigilantes, with or without the support of local officials, from interfering with the certification of Minnesota’s electors by the ‘safe harbor’ date [December 8, the last day for states to resolve contested election results]” and “to prevent illegitimate Federal efforts to intervene on behalf of local right-wing groups.”

In the event of contested results in other states, the groups declare their readiness to respond.

“Knowing that there may be energy to join nearby mass mobilizations, we may choose to host actions here to diminish the amount of out-of-state actors activating in that contest,” the document states. “For contests farther away, we will work to maintain public demand as asked to support their work and coordinated via national infrastructure.”

The groups describe their role from Election Day to Inauguration Day as entailing: collecting and sharing information; prepare their organizations and members with “tools, skills and messaging needed to organize and mobilize quickly, safely and effectively;” connecting and supporting collective resourcing efforts at a larger scale; and coordinating with national efforts in case of regions “that might be more directly contested than ours.”

Other tasks include advancing a public narrative that counteracts “what will definitely be an attack on protestors and violent backlash that will be increased by that” and coordinating with allied elected officials and former candidates to “broker in back-end negotiations with the DFL [Minnesota’s Democratic Party] and elected officials, with the express purpose of bringing a progressive frame” that lifts up “people power.”

According to the document, the groups’ planned activities correspond to three distinct phases: from now until Election Day, whereby they respond to “pre-election voter suppression and de-legitimacy work by Trump and the GOP” while preparing for the next phase; the ten days following Election Day, whereby they immediately respond to the election through mass mobilization efforts due to the anticipation that “Trump and the GOP will use institutional capacity to control election information and manipulate the results;” and the final “speculative” phase which follows, to be revisited in the future.

A list of principles to best guide the groups’ “work” during this “all hands, full hands” moment, include: the need to move fast, which “for some” means “faster than the pace of trust;” to “be about it, don’t talk about;” and to recognize that certain styles and forms of leadership are needed “not because it is right, but because it is necessary to win.”

The system being built by the groups is quite a serious one, involving both detail and complexity.

It entails the establishment of a nerve center capable of coordinating mass mobilization, “on and offline,” intended to advance the groups’ agenda as well as setting up networks to communicate  with elected officials and provide local intelligence.

In addition, the groups are developing training and resources — intended to be shared widely — to prepare masses of people, and already offer online training in preparation for election week.

The groups also aim to create a massive “tent” of supporters.

“We need a bigger tent than even the biggest we have built before,” the document proclaims as it elaborates on the goal to obtain their demands and create the world they seek through “joyful rebellion.”

The document also refers to “additional resources and references” which include radical resources such as: “Contested Election Threat Matrix,” “Paramilitaries at Your Protest: An Activist Field Guide to the Armed Far-Right,” and “Transition Integrity Project Report: Preventing a Disrupted Presidential Election and Transition.”

For the first time since 1972, Democrats are in serious danger of losing Minnesota — now one of the likeliest states to be the Electoral College tipping point, as reported by FiveThirtyEight.

In 2016, President Trump lost Minnesota by fewer than 45,000 votes. Currently, former Vice President Joe Biden holds only a slim lead over Trump in Minnesota, according to a Trafalgar Group survey released Wednesday.

As a result of the tightening of the race, Democratic presidential nominee Joe Biden on Thursday added a last-minute stop to the North Star State on Friday where President Donald Trump will be holding a pre-scheduled rally on Friday — Trump’s fourth campaign visit to Minnesota this year.

It’s the most attention Minnesota has received from both presidential candidates in years.

With less than a week until Election day, Minnesota has emerged as a potential battleground state in next Tuesday’s election that could determine who wins the presidency.

With the left preparing for mayhem, post election chaos and the implementation of the radical directives in the leaked document seem inevitable.