In 2018, a meteorite fell to Earth, causing a fireball that streaked across the sky in Michigan. Now, researchers have discovered the space rock contains “extraterrestrial organic compounds.”

The study, published in the scientific journal Meteoritics & Planetary Science, notes the meteorite was an H4 chondrite (only 4% of all meteorites that fall to Earth are H4 chondrites). It also contained more than 2,000 organic materials, including some dating back to the early days of the solar system.

“This meteorite is special because it fell onto a frozen lake and was recovered quickly. It was very pristine. We could see the minerals weren’t much altered and later found that it contained a rich inventory of extraterrestrial organic compounds,” the study’s lead author, Philipp Heck, said in a statement. “These kinds of organic compounds were likely delivered to the early Earth by meteorites and might have contributed to the ingredients of life.” 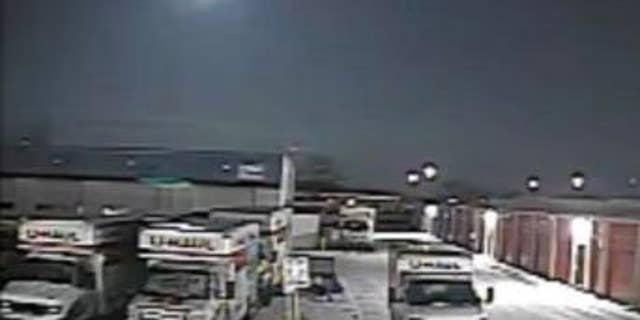 Security camera footage of the fireball in the sky over Toledo, Ohio (T. Masterson and the American Meteor Society)

Known as the Hamburg meteorite, the fireball entered the Earth’s atmosphere on Jan. 16, 2018. It lit up the skies over large parts of North America, including Ontario, Canada, and the midwestern part of the U.S., before ultimately crashing to Earth in Michigan.

A small chunk of an asteroid or comet is known as a meteoroid. When it enters Earth’s atmosphere, it becomes a meteor, fireball or shooting star. The pieces of rock that hit the ground, valuable to collectors, are called meteorites.

The fragment found by Ward was eventually donated to Chicago’s Field Museum, where it was observed by study co-author Jennika Greer.

“This meteorite shows a high diversity of organics, in that if somebody was interested in studying organics, this is not normally the type of meteorite that they would ask to look at,” Greer explained. “But because there was so much excitement surrounding it, everybody wanted to apply their own technique to it, so we have an unusually comprehensive set of data for a single meteorite.”

The researchers found that the ratio of uranium and its decayed state suggest the asteroid formed approximately 4.5 billion years ago, according to LiveScience. That means the material is from the very early days of the solar system and roughly the same age as Earth.

Since the meteorite fell onto a frozen lake, the fragments that were studied showed “no or little signs of terrestrial weathering,” the researchers noted in the study, making it cleaner than other meteorites that fall to Earth.

“Scientists who study meteorites and space sometimes get asked, do you ever see signs of life? And I always answer, yes, every meteorite is full of life, but terrestrial, Earth life,” Heck added. “As soon as the thing lands, it gets covered with microbes and life from Earth. We have meteorites with lichens growing on them. So the fact that this meteorite was collected so quickly after it fell, and that it landed on ice rather than in the dirt, helped keep it cleaner.”

In 2019, a separate group of researchers suggested meteorites actually made life possible on Earth. They identified isotopes of selenium in rocks in Earth’s mantle and found identical isotope signatures inside certain meteorites, notably those from the outer solar system.