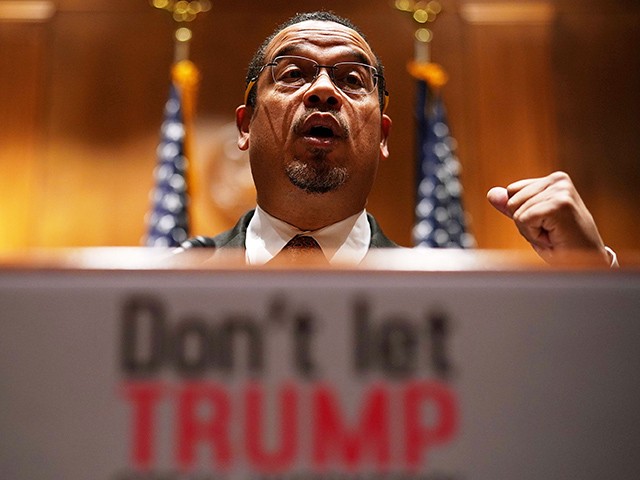 The venue for President Donald Trump’s political rally in Minnesota scheduled for Friday will be restricted to only 250 people after Minnesota Attorney General Keith Ellison put pressure on the business owners of multiple locations.

The event was then moved to Dodge Center, prompting Ellison’s office to ask the Trump campaign and the owner of the building McNeilus Steel for their “COVID Preparedness Plan.”

That prompted the Trump campaign to move the event again, back to the airport.

“Thanks to the free speech-stifling dictates of Gov. Tim Walz and Attorney General Keith Ellison, only the first 250 people will be admitted,” the campaign said in a statement sent late Thursday night.

“Without question, Minnesota Democrats had hoped that the President would simply cancel the event, but he will not allow partisan politicians to deprive people of their First Amendment rights to gather peacefully to hear directly from the President of the United States,” the statement continued.

Trump supporters volunteering for the event immediately expressed their outrage on social media when they found out from organizers that the rally location was canceled. Comparisons were made with the large crowds of protesters last summer over the death of George Floyd.

“Suppression. Interference with our first amendment rights,” she wrote on Twitter. “This is what Gov Tim Walz and Attorney General Keith Ellison are doing by abusing the power of their offices to block us from seeing our President!”

This is what @GovTimWalz @AGEllison are doing by abusing the power of their offices to block us from seeing our President!

We will see @realDonaldTrump and this manipulation by the left will backfire in 5 days. pic.twitter.com/iYEzjX0RsR

The local politics of rallies during the coronavirus continues to build in states led by Democrats.

Former Vice President Joe Biden will hold a campaign rally at Mitchell International Airport in Milwaukee tomorrow, less than a week after the airport refused to allow President Trump to hold a rally there.

An airport spokesman told Dan O’Donnell, the host of a local talk show in Wisconsin, that Biden’s rally would be much smaller and permitted.

An airport spokesman tells me because Biden’s rally will be much, much smaller than Trump’s, it won’t affect airport operations and is thus permissible

In September, pressure from local officials forced the Trump campaign to shift rally locations in Nevada.

Ellison defended his actions in a statement to ABC5 News as part of his responsibility to keep Minnesotans “safe” from the coronavirus.

“We did not cancel this event: indeed, we have no authority to cancel events and have never cancelled an event,” he said, and added, “As Attorney General charged with enforcing our executive orders, I take very seriously my responsibility to stop it from spreading and cannot not exempt anyone, regardless of their political views, from complying with requirements to keep all Minnesotans safe from it.”