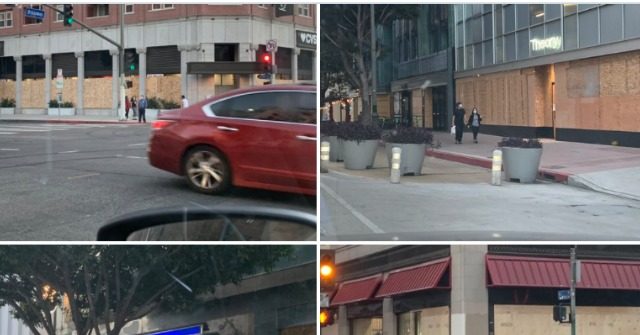 Businesses throughout major cities in America, particularly in California and Washington D.C., are bracing for what is expected to be a chaotic Election Day full of protests.

Bill Melugin, a journalist for Fox 11 Los Angeles, shared photos to Twitter on Thursday that showed concerned business owners boarding up their windows to avoid damage from protesters and looters on Election Day.

“Driving through downtown LA…so many businesses boarded up & in the process of boarding up,” Melugin wrote.

Driving through downtown LA…so many businesses boarded up & in the process of boarding up. Same thing happening in Beverly Hills & Santa Monica in anticipation of election night. All 3 areas hit hard by looters & rioters during George Floyd unrest. pic.twitter.com/wxrfs3ErDN

Beverly Hills Police Chief Dominick Rivetti announced earlier this week that the famed Rodeo Drive will close on Election Day in an effort to combat expected violence and destruction.

Rivetti also stated that the Beverly Hills Police Department would be on “full alert” from Halloween and throughout the election day cycle.

Other photos shared on Twitter throughout the last week have shown business owners in Washington, D.C. preparing for civil unrest on Election Day as they board up their storefront windows.

Luxury shops in DC are boarding up in anticipation of the election. pic.twitter.com/3VMVkvoMsG

Happening now – store fronts being boarded up in downtown DC ahead of the election. This is the National Press Building near the White House. @nbcwashington pic.twitter.com/FWd8mK8ZkL

Washington DC is boarding up shopfronts, preparing for election destruction. This is the 3rd time they’ve done this since June. pic.twitter.com/eQc8lhe30L

Given what we experienced over the course of the spring and the summer, we can’t presume that what’s going to happen … is going to be peaceful. We are preparing for the worst. So what we’ve been doing is a lot of drilling, a lot of making sure that we break down barriers, that no one part of election security is operating in a silo.

A confidential document obtained by Breitbart News revealed Thursday that a coalition of left-wing groups in Minnesota who fear a Trump victory are preparing for post-election mass unrest while planning to execute wide-scale “strategic disruption.”

Several violent protests have broken out across America in recent days, including major demonstrations in Philadelphia and New York. Those demonstrations led to the looting of a Walmart located in the Port Richmond neighborhood of Philadelphia.

The destruction caused by Black Lives Matter protesters in Philadelphia also led to the looting of a Black entrepreneur’s boutique.

“We as Black people really need to reunite and come together,” said Jameelah Scurry, owner of La’vanter Boutique in North Philadelphia. “Destroying and tearing down our own people is not the answer.”