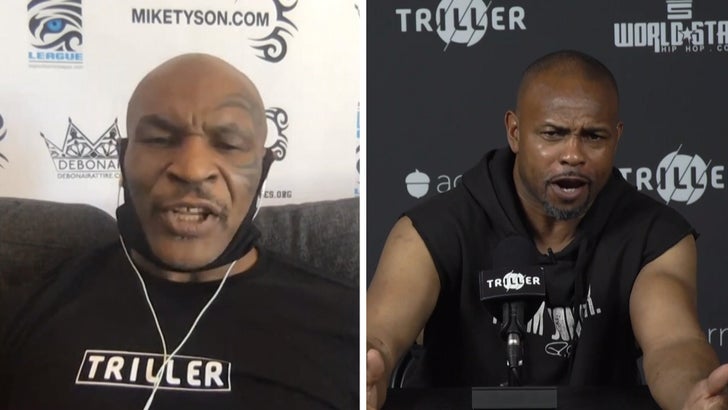 Mike Tyson and Roy Jones Jr. say they’re both on the same page about their upcoming “exhibition” fight — it’s not a game, they’re going for blood.

The two boxing legends just addressed the media for their big Nov. 28 fight at Staples Center in L.A. (available through PPV on Triller) and clapped back hard at the suggestion it will be a friendly show.

“We got Mike Tyson and Roy Jones Jr. — and I’m coming to fight,” Tyson said Thursday … “I hope [Roy is] coming to fight and that’s all you need to know.”

The issue is, the head of the California State Athletic Commission has said the guys will be going EASY on each other and WON’T be headhunting.

Here’s what CSAC executive director Andy Foster told Yahoo Sports — “This isn’t a situation where they’re going out there to try to take each other’s heads off. They’re just going to be in there moving around the ring and letting fans see these legends.”

On Thursday, Roy assured the media that’s just not the case.

“The last guy who did an exhibition with Mike got dropped in the 1st round. And if you don’t know that, there’s something wrong with you,” Roy said.

Roy was referencing Mike’s 2006 exhibition with former heavyweight boxer Corey “T-Rex” Sanders. Tyson was clearly goofing around and not trying to kill the guy.

This time, Roy says the fight will be competitive.

Mike says he’s been training like a maniac — yeah, we’ve seen the videos — and he’s getting his killer mentality back.

In fact, Mike says he’s not staying with his family at the moment because “there’s no way to live with me. They’d kick me out of the house.”