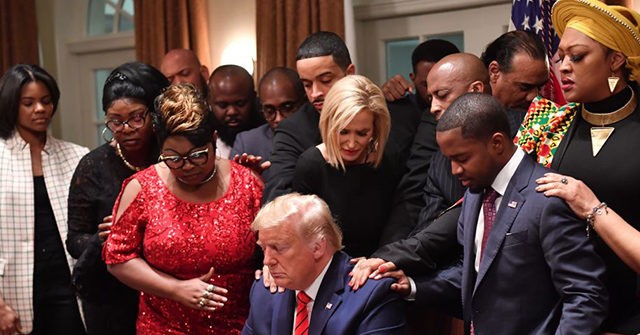 The daily Rasmussen Reports poll that tracks black support for President Donald Trump shows the president sitting at 31 percent as of Thursday, just five days before the election.

“If the presidential election was held today, would you vote for Donald Trump or Joe Biden?”

In 2016, according to exit polls, Trump earned just eight percent of the black vote, compared to 88 percent for Hillary Clinton.

So if Rasmussen is wrong, let’s say by a factor of two, if support from likely black voters ends up being just half of what the pollster found, just 15 or 16 percent, Trump would still end up doubling his 2016 share of the black vote, which would mean he won more black support than any modern Republican presidential contender. Bob Dole won 12 percent of the black vote in 1996 and that was considered a big deal, although he still got drubbed.

Rasmussen has also been tracking Trump’s job approval with black Americans and has watched it creep up to as high as 46 percent as recently as last week.

While this is an outlier poll, it is not the first one showing increased support for Trump with, not only black voters, but also Hispanic voters.

In 2016, Trump won just 28 percent of the Hispanic vote, which was right in line with Mitt Romney and John McCain, but well below George W. Bush’s 44 percent in 2004.

So what do we know for sure…?

Well, it seems that Trump has juiced his black support either a little or a whole lot, and hasn’t lost any ground despite a 24/7 corporate media propaganda campaign meant to smear him as a racist.

It also seems as though Trump has definitely increased his share of the Hispanic vote, which makes you wonder about the early vote returns we’re seeing in states like Nevada and Arizona, where the race is going to be close.

Did black and Hispanic voters who support Trump change their party affiliation to Republican? Since we only know how many Republicans and Democrats returned their ballots or voted early in person, this could mean there are more Democrat early votes for Trump than what’s expected when those ballots are opened and counted on Election Day.

There’s no question that, unlike any Republican I can remember, Trump has spent considerable time and political capital reaching out to the black community and producing in the form of record low unemployment, criminal justice reform, and an openness to serious dialogue.

This is one the primary reasons Democrats and the corrupt media have spent so much time and energy lying about Trump being a racist. If the Democrats lose even 25 percent of the black vote, they are finished as a major American party.