Four men — including a social studies teacher who is also a prominent outspoken activist — were named Thursday in a federal indictment related to unrest in Philadelphia days after the police killing of George Floyd.

In a separate case, Ayoub Tabri, 24, of Arlington, Va., is charged with setting a Pennsylvania State Police SUV ablaze. Both incidents occurred on May 30. All four men are also charged with obstructing law enforcement during a civil disorder. They each face a minimum of seven years in prison and $750,000 in fines.

In a statement, William McSwain, the U.S. attorney for the Eastern District of Pennsylvania, said his office supports peaceful protests and the protection of First Amendment freedoms. 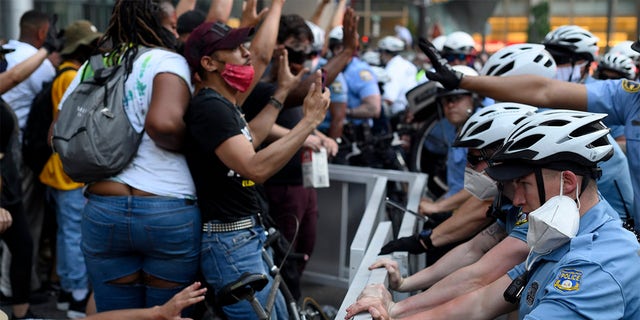 Police officers and protestors clash in Center City Philadelphia, PA on May 30.  (Photo by Bastiaan Slabbers/NurPhoto via Getty Images)

“We take that responsibility very seriously. But violence is not speech,” he said. “There is no right to riot, loot, rob, destroy or commit arson. If you engage in violent civil unrest and commit a federal crime in this district, we will come after you as hard as we can because residents deserve safe and secure neighborhoods, not mayhem.”

A criminal complaint alleges Smith, Miller and Matchett placed combustible materials inside a Philadelphia police vehicle near City Hall after a road flare inside the car started a fire. Prosecutors did not say whether the men actually started the fire.

Around the same time as the car fire, Tabri allegedly threw a lit road flare into a state police SUV that was stationed on the on-ramp to Interstate 676 in an effort to prevent protesters from getting onto the freeway.

Before the vehicle was set ablaze, its windows were shattered and equipment inside was stolen, federal prosecutors said. Both incidents occurred amid riots that saw looting, burglary, vandalism and a range of other crimes following a peaceful protest earlier in the day.

“These individuals were not in the city to participate in a peaceful protest. Instead, it appears they posed as protestors and allegedly set fire to a Pennsylvania State Police vehicle and a Philadelphia Police vehicle,” said Matthew Varisco, special agent in charge of the Philadelphia office for the Bureau of Alcohol, Firearms, Tobacco and Explosives. “Arson is an extremely violent act which presents a tremendous threat to public safety.”

The timing of the men’s arrests on Wednesday raised questions as the city deals with the fallout over the Monday police shooting death of Walter Wallce Jr. Smith, the teacher, is one of the lead organizers of the Philadelphia Coalition for Racial and Economic Legal Justice (Philly for REAL Justice), the Philadelphia Inquirer reported.

“After two nights of mass arrests and police brutality against community members calling for justice for Walter Wallace, seeing federal charges brought against a movement leader like Anthony is sickening,” Smith’s friend, James Miles, said in a statement released by Philly for REAL Justice. “All this makes you wonder, ‘Is the federal government arresting and charging movement leaders to try to scare the rest of us?’”

Smith teaches social studies at the YouthBuild Philadelphia charter school. The school did not immediately reply to messages and calls from Fox News regarding his future employment status.

Smith’s arrest came days after being named one of Philadelphia Magazine’s most influential people for his activism. In an article that appears in the magazine’s November issue, Smith said: “We have shown the city that mistreatment will be met with resistance.”

He is also a plaintiff in a lawsuit against the city and police that alleges he was grabbed by police and driven around for several hours for a curfew violation during protests over Floyd’s May 25 death, the magazine reported.

“Approximately 15 officers circled around him,” the lawsuit reads. “Mr. Smith feared that like Mr. Floyd, and other Black people on whose behalf he had protested, he would be killed by police.”

The Justice Department has pledged to crack down on rioters following months of nationwide demonstrations and unrest over police misconduct and racial injustice. McSwain denied using his office to target Smith and other activists.

“Mr. Smith was not in any way targeted by my office,” he said during a news conference. “I knew nothing about Mr. Smith or his affiliations until the investigation was nearly complete,” McSwain said. “We do not investigate people at the U.S. Attorney’s Office. We investigate alleged criminal behavior.”

“Utilizing the awesome power of the federal government to target activists and select them for federal prosecution during one of the most important social justice movements in our history sends a dangerous message,” he said. “The prosecution of my client, Anthony Smith, a respected teacher and political activist, is part of a broader effort by this administration to criminalize and quell dissent expressed by progressive political movements.”

Calls and messages to Hetznecker were not returned. The four men remain in federal custody.