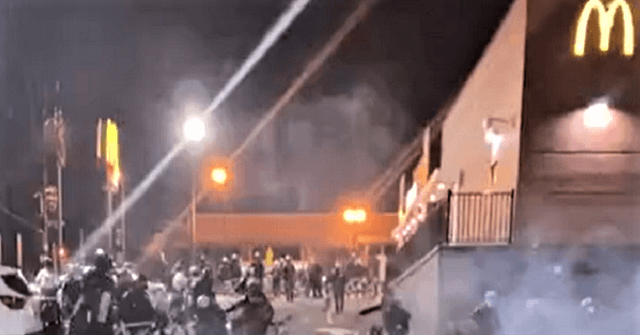 Initial reports indicate that someone from a crowd of protesters gathered outside the 4th District police headquarters in DC threw fireworks behind a line of police officers.

A video posted on Twitter shows a large fireworks device being thrown at a line of police officers on bicycles outside a McDonalds.

#DC
Footage from before. A large firework is thrown at the police, maybe even injuring one officer.

The full video posted on Instagram shows the lead up to the explosion and more of the aftermath. The explosion happens at about the 13-minute mark in the video.

An update from Alan Hennery reports more injured officers taken to hospitals due to burns, bricks, and injured ankles.

Fox 5 DC also reported the injuries to the officers. Fox 5 reported that police officials confirmed that several officers were injured on Wednesday evening during the police station protest. Officials told the local news outlet that some arrests have been made.

Streaming journalist Alejandro Alvarez was broadcasting outside the fourth district station and appeared to have lost his feed at about the time of the incident. When he resumed, he reported that the protest had been peaceful “until they weren’t.”

“Things were kind of calm,” Avarez reported. “Until they weren’t — just now.”

He said police suddenly deployed crowd control devices and moved people back away from the police station. “That was the first confrontation of the night.”

During a live broadcast Wednesday night, WJLA ABC7 in DC also reported the injuries to the police officers. Journalist Carl Willis said the extent of the injuries was not known at that time.

Reports on Twitter indicate as many as four officers may have sustained injuries. Those possible injuries include concussions, a lower-body injury, and an eye injury.

The DC Police Department Twitter feed does not report or confirm, at this time, any injuries to their officers.