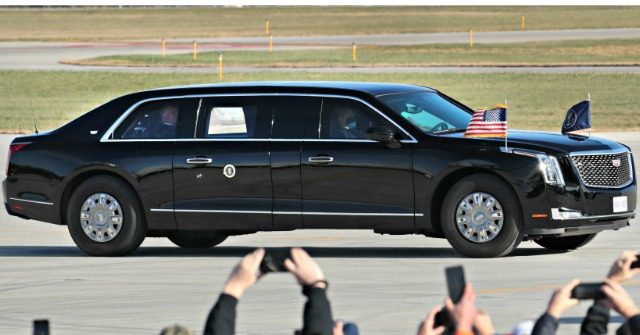 President Donald Trump took time to greet a massive overflow crowd of supporters in Minnesota on Friday after Democrat officials limited his campaign rally to 250.

After arriving at the airport, the president rode in his limousine away from the rally location and down the fence line of the airport, where thousands of people were waiting outside.

He waved at supporters from inside the car and exited the vehicle to greet some of them.

“There are thousands of people, all because the governor wants to play games,” Trump said to reporters.

After he returned to the rally, President Trump accused local Democrat officials and Gov. Tim Walz of trying to get him to cancel the event.

“Your far-left Democrat attorney general Keith Ellison and your democrat governor tried to shut down our rally, silence the people of Minnesota, and take away your freedom and your rights,” Trump said.

The location of the rally was moved from the airport to a larger location, but Ellison pressured the owners of the building to deliver a “COVID Safty Plan” and limited the gathering to 250. Trump vowed to hold the rally despite the restrictions.

“I said, ‘No way – I will never abandon the people of Minnesota. I will come out,” Trump said.

The president thanked his supporters, calling them “American patriots” and tore into Ellison for restricting their rally.

“When large numbers of rioters and vandals sacked the city of Minneapolis early this year, Keith Ellison did not ask them to submit a permit,” he said.

The president said Ellison unfairly blocked his supporters from attending the rally, while he was more permissive of the leftist rioters and looters that stormed Minneapolis during the George Floyd protests in the summer.

“Keith Ellison sided with flag burning extremists over law-abiding Americans,” Trump wrote. “He treats you like second class citizens. He believes that the pro-American voters have fewer rights than anti-American demonstrators.”

Keith Ellison and Joe Biden want to imprison you in your homes while letting anarchists, agitators, and vandals roam free as they destroy your cities and states. The Democrat party wants you to be banned from peaceful assembly while they allow their supporters to burn down a police precinct.

Trump spoke for about 23 minutes at the podium before leaving the rally.

“This Tuesday or sooner, get out and vote. Every one of you,” he said as he concluded. “Remember what your governor did this evening. And it’s a small thing but a horrible thing to thousands and thousands of people that are outside.”