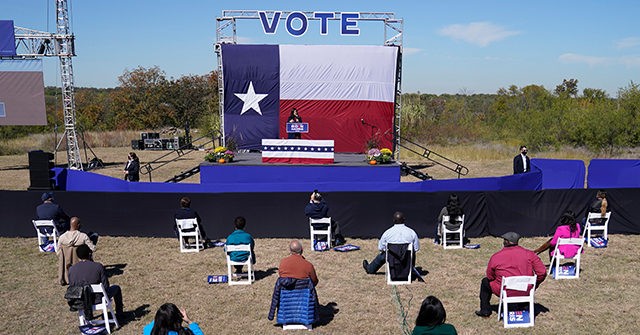 Twitter user Joel Fischer shared a photo of the event that showed the socially distanced audience waiting for Harris to take the stage:

Dang, the turn out is unbelievable. pic.twitter.com/NQn1yFA44Q

The Democrat senator and vice presidential candidate tweeted just before 1 p.m., “Fort Worth is fired up and ready to elect a leader who values decency over division and will bring dignity back to the White House”:

Fort Worth is fired up and ready to elect a leader who values decency over division and will bring dignity back to the White House. Join the excitement now by tuning in to our get out the vote rally. https://t.co/yAN4loG6We

Joe Biden has kept his eye on Texas during his final week on the campaign trail, according to Breitbart News, and the Washington Post reports that “Democrats see opportunity in the Lone Star state thanks to ‘demographic changes’ that have secured Virginia and Colorado for them.’”

Democrats, according to the Post, are hopeful in Texas as Biden and his running mate, Sen. Kamala Harris (D-CA), make last-minute campaign stops in the state. Those hopes are almost exclusively reliant on the state’s “demographic changes” over the last three decades from immigration.

However, Sen. John Cornyn (R-TX) argued during a recent interview on Fox & Friends that “radical” Democrat policies “aren’t going to play in Texas,” according to Breitbart News:

Chuck Schumer has hand-picked my opponent and funneled millions of dollars there because they think they have a chance of turning Texas blue. What they didn’t calculate is that the radical policies of New York and California, from the Green New Deal, to Medicare for All, to eliminating fossil fuels, those aren’t going to play in Texas. So, I’m optimistic, but there’s going to be a ton of money poured into the race, as you’ve seen my opponent raise $13.5 million last quarter and I think there will be more now.

Over one million ballots were cast on the state’s first day of early voting, Breitbart News reported on October 15.

“Harris County, a heavily Democrat county with the most people in the state, had the biggest turnout, with 170,000 ballots cast either in-person or by mail-in voting as of early Wednesday,” the article said.