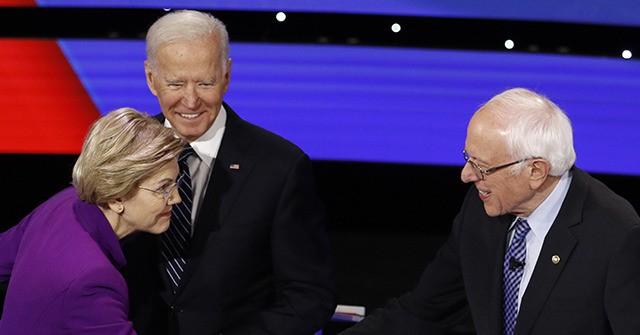 Joe Biden claims that he “beat the socialist” in the Democratic primary, but the socialist could be joining him in his Cabinet if he wins on Tuesday.

According to Fox News, supporters of socialist Sen. Bernie Sanders (I-VT) have confirmed that he is interested in serving as Secretary of Labor: “Two sources close to Sanders’ orbit confirm to Fox News that the populist senator from Vermont does have interest in serving as Department of Labor secretary in a potential Biden cabinet.”

He would not be the only left-wing candidate to join the supposedly “moderate” Biden.

Sen. Elizabeth Warren (D-MA), who –like Sanders — proposed a wealth tax, backed the Green New Deal, and supported Medicare for All, wants to be Secretary of the Treasury, with her name on every dollar bill.

Elizabeth Warren wants to be Joe Biden’s Treasury secretary and will make her case for it if he wins next week, according to three Democratic officials who have spoken with her inner circle.

“She wants it,” two of them said matter-of-factly.

Warren allies say that the job is appealing because it is a once-in-a lifetime opportunity to enact some of the “big structural change” she talked about during the presidential primary, rather than just pressuring Cabinet officials from her Senate perch.

Other left-wing primary rivals have already been tapped for roles in a potential Biden administration. Former Rep. Beto O’Rourke (D-TX), for example, who promised a policy of gun confiscation, has been promised a leading role in gun control.

Biden has promised to be one of the most “progressive” presidents in American history.

On Thursday evening, he made a closing pitch to voters in Florida: “[In] five days … we literally are going to change the course of this country for generations to come.”