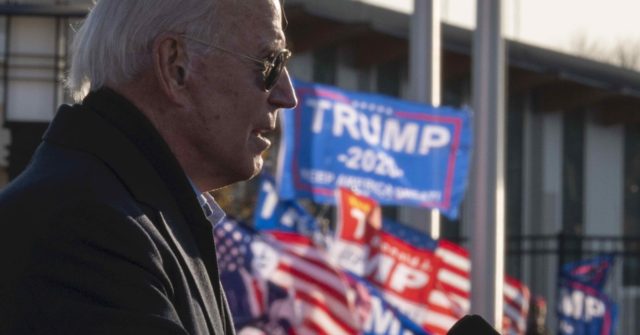 Vice President Joe Biden addressed a drive-in rally Friday afternoon in a parking lot in St. Paul, Minnesota — and was drowned out by the honking of Donald Trump supporters in their cars.

During the course of his speech, Biden repeatedly snapped at the Trump fans, who protested his visit outside the fence.

“These guys are not very polite, but they’re like Trump,” Biden said, raising his hand towards the pro-Trump crowd. “They’re gonna be okay. We’re gonna take care of them as well. We need to come together. Need to fight for all these folks.”

Later, Biden referred to the Trump supporters nearby as “ugly folks” as he explained why he believed a nationwide mask mandate to be a “patriotic duty.”

“Dr. [Anthony] Fauci called for a mask mandate last week,” Biden stated. “This isn’t a political statement like those ugly folks over there beeping their horns. This is a patriotic duty for God’s sake.”

According to those on the scene, there were more Trump supporters who showed up for Biden’s event than Biden supporters.

There are currently more Minnesota Trump supporters lined up outside the Biden event than cars in attendance for the campaign event in St. Paul. pic.twitter.com/8GuRzuavbf

If you’re doubting @realDonaldTrump’s ability to win Minnesota, check this out. While there’s almost no cars at the Biden event in ST. PAUL, there are hundreds of Trump supporters right across the street 😳 pic.twitter.com/MIdeUGBaLX

The Trump supporters gathered outside of Biden’s event also recited the Pledge of Allegiance, which was captured on tape by a reporter.

Biden made a visit to the state in an attempt to shore up support in the face of a determined push by President Donald Trump to win Minnesota, which he came close to doing in 2016.

He repeated much of his typical stump speech — including false claims about Social Security, and debunked claims about what Trump said about soldiers.