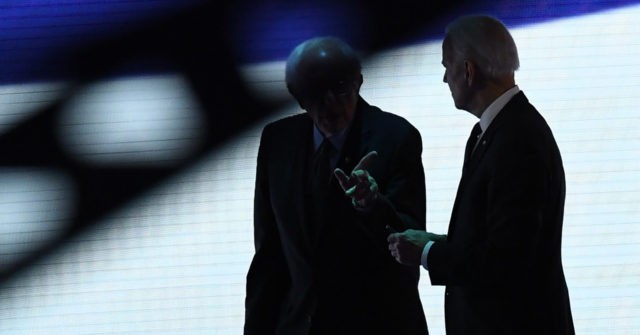 Sen. Bernie Sanders (I-VT) spoke to the far-left members of the “Squad” in a virtual roundtable discussion on Friday, emphasizing that electing Joe Biden (D) would not be the “end-all” but only the “beginning” of their plans to push their radical agenda, ultimately making Biden the “most progressive president since FDR.”

“But we understand that electing Biden is not the end-all. It is the beginning,” the Vermont senator said.

He lauded the congresswomen for their work in making Biden’s plans “much stronger” than they were during the Democrat primary, singling out Ocasio-Cortez’s work on the Climate Change Task Force.

“Do they [Biden’s plans] go as far as we would want? No, they don’t,” Sanders said, adding that “Biden, unlike Trump, does not conceive of himself as a dictator.”

“We’re not giving up on our agenda,” Sanders promised, using their advocacy for Medicare for All as a prime example:

You know Biden wants to expand health care. Wants to lower prescription drug costs. That’s great. Wants to double funding for community health centers. Very important. But you know and I know that at the end of the day, the only way that we’re going to provide quality care to every man, woman, and child in an affordable way is through Medicare for All. And we ain’t giving up on that struggle. We’re going to introduce Medicare for All. Believe me, we are.

Sanders also mentioned the Green New Deal, promising that they will not be giving up because lawmakers need to be “bolder than ever before” in addressing climate change.

However, Sanders said their first task is to “defeat the worst president in the modern history of this country.” Then, they will “organize our people to make sure that Biden becomes the most progressive president since FDR.”

Pressley chimed in, thanking Sanders for inspiring people, as did Ocasio-Cortez, who expressed gratitude for Sanders “normalizing bringing the ruckus on the Democratic Party.”

“Because that was not seen as ok for a very long time. It was seen as extremely taboo for a very long time, and it would result in so many people being ostracized and targeted,” she said, noting that they all won their seats by challenging the Democratic establishment.

Tlaib added that they stand with Sanders in speaking the truth, prompting Sanders to note that he, an “old Jewish white guy,”  has a lot in common with the “Squad” because they come from the same background and “know what it’s like to struggle out there”:

Some people ask what an old Jewish white guy has in common with young women of color like @AOC, @AyannaPressley, @IlhanMN and @RashidaTlaib.

We understand each other. We come from working class backgrounds. And we’re going to go forward together. pic.twitter.com/bANr9KbkmA

He expressed love for each of them and promised that they are going to move forward “together.” Tlaib agreed, promising to “fight every injustice” moving forward.

This is not the first time Sanders or members of the “Squad” have indicated that they intend to push Biden, who has publicly rejected the Green New Deal and Medicare for All, further to the left.

“I think, overall, we can likely push Vice President Biden in a more progressive direction across policy issues,” Ocasio-Cortez said in an interview with Just the News in September.

Biden signaled that he remained open to embracing far-left radicals after selecting Sen. Kamala Harris (D-CA) as his running mate. In 2019, GovTrack rated Harris as the most liberal senator in the U.S. Senate, surpassing Sanders:

According to GovTrack, Kamala Harris was the most liberal member of the U.S. Senate in 2019.

Even more liberal than Bernie Sanders.

The takeover of Joe Biden by the extreme left is now complete.

Additionally, Biden embraced the “Biden-Sanders Unity Task Force” proposal over the summer, which contains a slew of far-left proposals including rejoining the Paris Climate Agreement and creating a commission to “examine the impact of slavery and Jim Crow with the end goal of recommending ‘remedies,’ or reparations.”