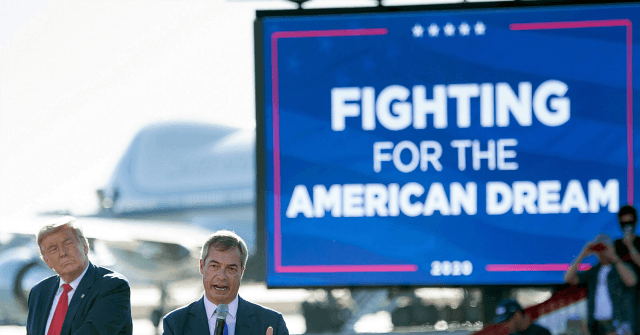 Brexit Party leader Nigel Farage has predicted victory for President Donald Trump in Tuesday’s election, saying that like how the polls were wrong about Brexit and Trump in 2016, they’re wrong in 2020, too.

Mr Farage is in the United States and reporting for The Telegraph on the campaign trail as President Trump holds rallies in key battleground states.

Speaking to ITV’s Good Morning Britain on Friday, the Brexit Party leader compared Democrat candidate Joe Biden’s campaign to the energy surrounding President Trump, saying: “What I saw in Arizona is a massive enthusiasm for Trump, for the values that he stands for.”

He added that he had met many converts to the President, those who had not voted for him in 2016 “but are with him here in 2020”.

A victory for Trump isn’t just good for America, it’s good for the UK too.

He is the first US President in 30 years who genuinely likes the UK.

“The opinion polls got Brexit wrong. The opinion polls got Trump wrong in 2016. My belief is this is absolutely neck and neck, but what I see with four campaign days to go is… Trump is full of energy, full of enthusiasm, doing rallies all over the country. The momentum is with Trump… I think the polls are wrong,” he said.

During a campaign rally in Arizona on Wednesday, Mr Farage had praised the President as the “bravest person I have ever met”, having survived four years of the political and media establishment trying to delegitimise him and his presidency.

“When you vote next week, you are not just voting for who the President of the United States of America is — vital though that question may be — you are voting for the leader of the Free World.

Speaking to ITV on Friday, he added that “a victory for Trump isn’t just good for America, it’s good for the UK, too, because he’s the first president in 30 years who genuinely likes the UK”.

Farage Praises Trump as ‘Bravest Person’ He’d Ever Met, Who Stands Up for Patriotism, Against Globalism https://t.co/65xBMqWRBq

While a friend of Mr Farage, President Trump is also an ally of the United Kingdom, promising a free trade deal after the country leaves the EU’s institutions at the end of the transition period on January 1st.

Biden, however, weighed in on Brexit negotiations last month, taking the EU’s side over governance of Northern Ireland, with Farage warning that Biden would be “an anti-British U.S. president”.

“If I were him I would worry more about the need for a peace deal in the USA to stop the killing and rioting before lecturing other sovereign nations,” Sir Iain added, in reference to the violence committed in U.S. cities by Antifa and Black Lives Matter activists.

During a presidential debate late last month, Biden had claimed that “Antifa is an idea, not an organisation.”

“Antifa is an organisation, not an idea,” responded President Trump. “Antifa is a dangerous, radical group, and you better be careful with them. They’ll overthrow you.”

Delingpole: A Biden Presidency Would Be No Friend to Brexit Britain https://t.co/qam4zNz1GN