James Bond legend Sir Sean Connery has died in his sleep aged 90 following a long illness, his family have announced.

Tributes have been pouring in for the Oscar-winning actor who passed away in the Bahamas and leaves behind his wife Micheline and sons Jason and Stefan.

Jason told the BBC his father had been surrounded by ‘many of his family’ who could make it to the Caribbean when he died.

He said: ‘We are all working at understanding this huge event as it only happened so recently, even though my dad has been unwell for some time.

‘A sad day for all who knew and loved my dad and a sad loss for all people around the world who enjoyed the wonderful gift he had as an actor.

Sir Sean, whose movie career spans five decades, is best known for the first to portray the role of British fictional spy 007 who he played between 1962–1971.

He was today hailed as ‘the world’s greatest Scot and last of the real Hollywood stars’ as the acting community and beyond rallied to remember him. 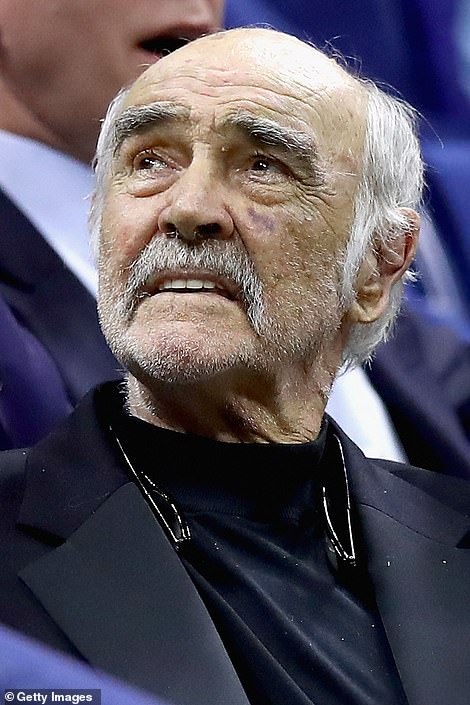 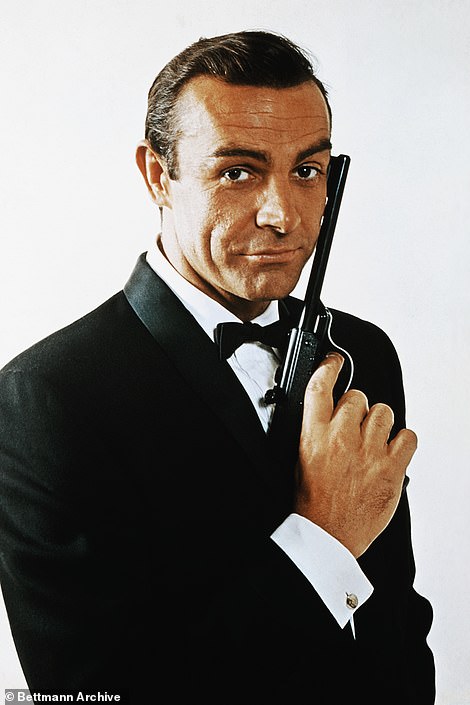 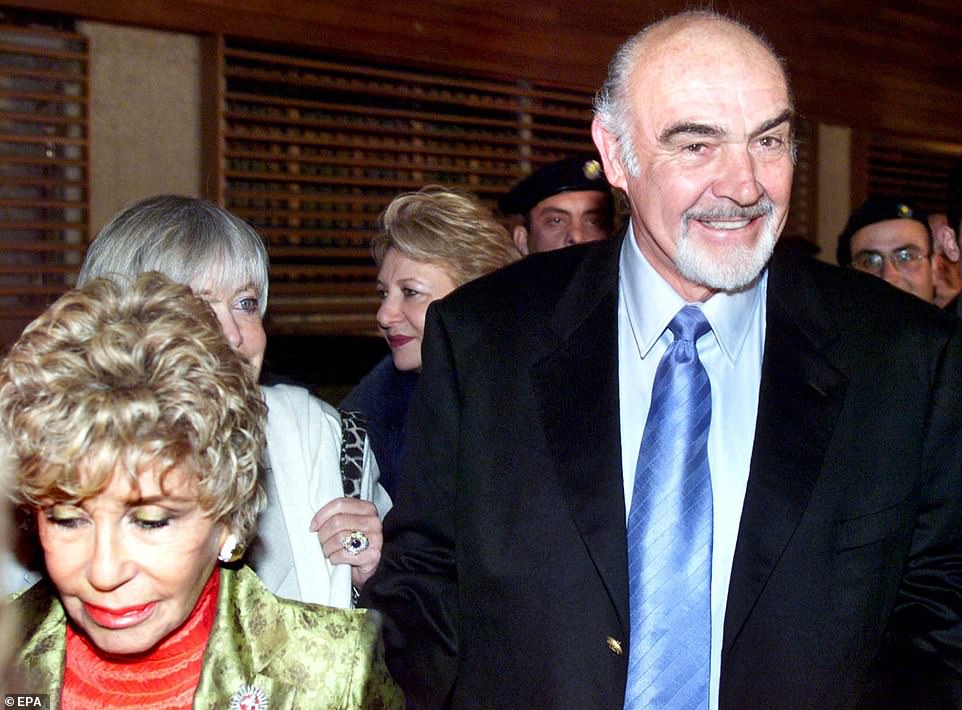 Sean Connery accompanies his wife Micheline Roquebrune  to Athinais gallery to open an exhibition of her paintings in Athens, Greece, 2001 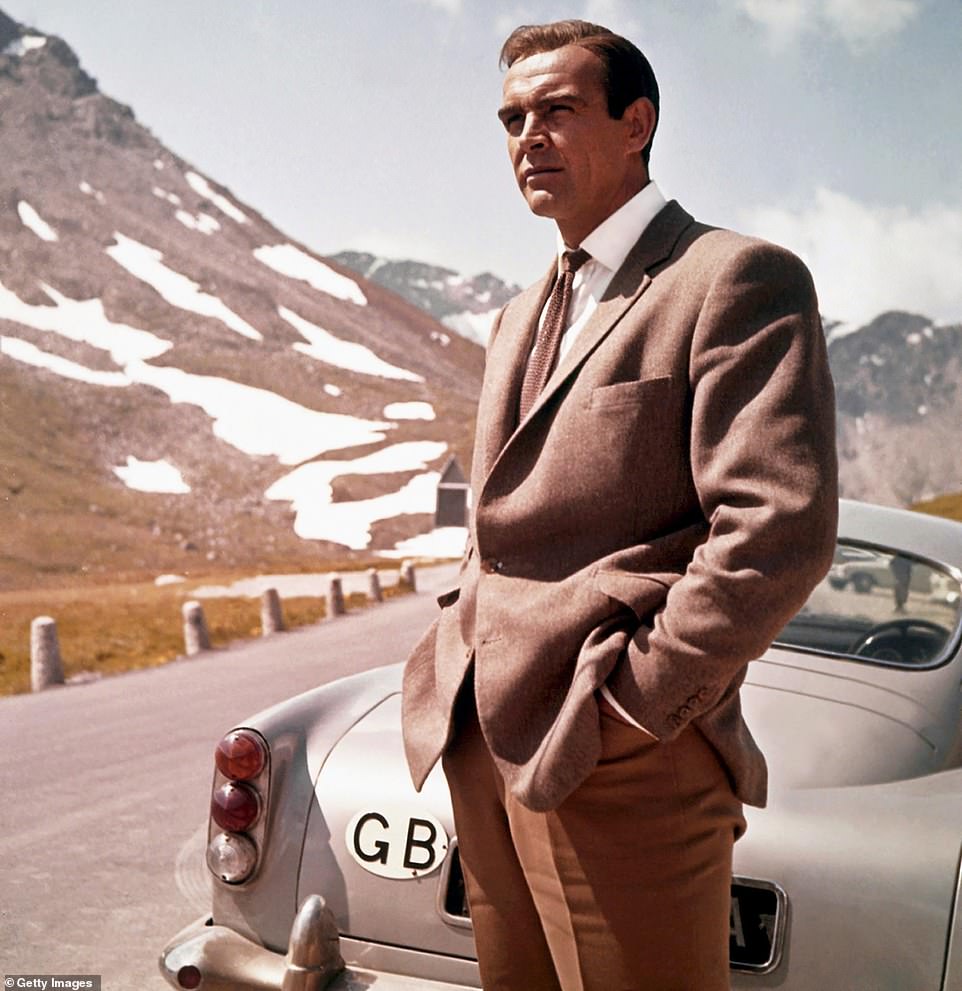 Sir Sean frequently tops polls as the best Bond to have played the role following his part in Dr No, From Russia With Love, Goldfinger, Thunderball and You Only Live Twice.

Bond producers Michael G Wilson and Barbara Broccoli paid tribute to Sir Sean in a statement: ‘We are devastated by the news of the passing of Sir Connery.

‘He was and shall always be remembered as the original James Bond whose indelible entrance into cinema history began when he announced those unforgettable words – ‘The name’s Bond… James Bond’ – he revolutionised the world with his gritty and witty portrayal of the sexy and charismatic secret agent.

‘He is undoubtedly largely responsible for the success of the film series and we shall be forever grateful to him.’

Hugh Jackman tweeted: I grew up idolizing Connery. A legend on screen, and off. Rest In Peace.’

Born Thomas Sean Connery in Edinburgh’s Fountainbridge area on August 25 1930, the actor left school at an early age and took his first job as a milkman.

At 16 he enlisted in the Royal Navy but was discharged three years later on medical grounds after suffering a stomach ulcer.

His first major step into acting came in 1957 when he secured a role in the British gangster film No Road Back.

After Bond catapulted him to acting superstadom he went on to forge a glittering career and won an Oscar in 1988 for his part playing an Irish policeman in The Untouchables.

He also starred in The Hunt for Red October and recently won new fans in Indiana Jones and the Last Crusade and The Rock. 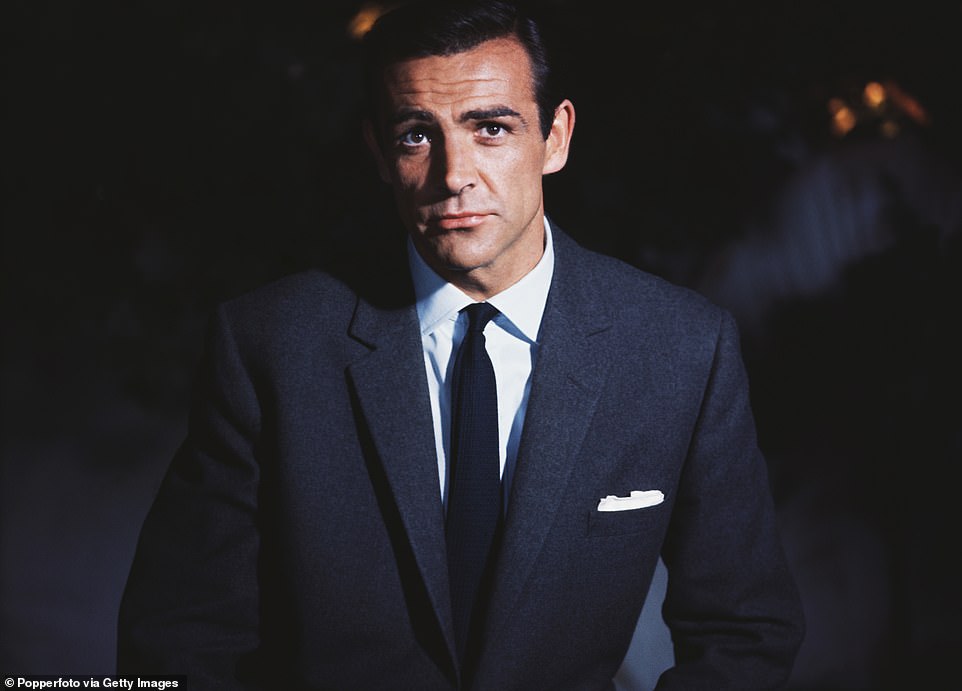 Sir Sean (pictured in 1963) whose movie career spans five decades, is best known for the first to portray the role of British fictional spy 007 who he played between 1962–1971 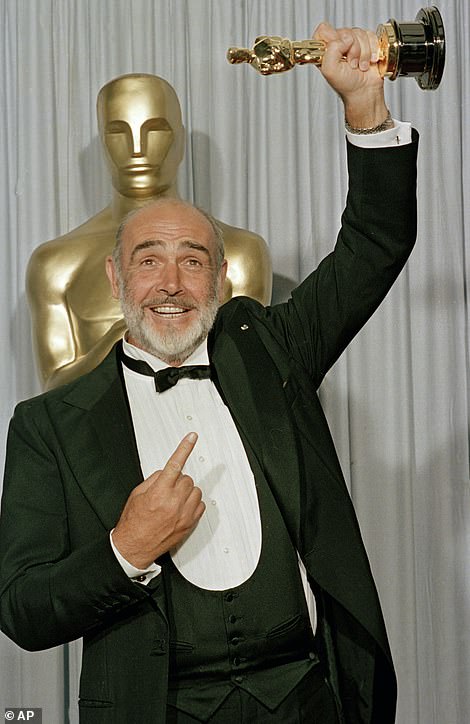 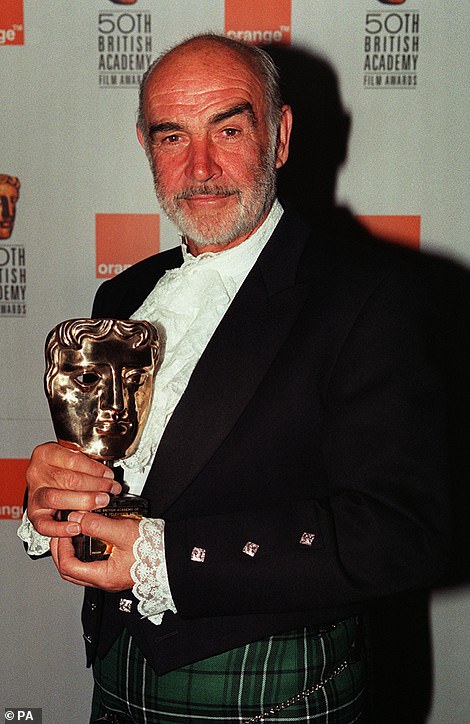 A fierce nationalist, he banged the drum for Scottish Independence ahead of the 2014 referendum and befriended key SNP figures.

His successor Nicola Sturgeon said: ‘I was heartbroken to learn this morning of the passing of Sir Sean Connery. Our nation today mourns one of her best loved sons.

‘Sean was born into a working class Edinburgh family and through talent and sheer hard work, became an international film icon and one of the world’s most accomplished actors.

‘Sean will be remembered best as James Bond – the classic 007 – but his roles were many and varied. He was a global legend but, first and foremost, a patriotic and proud Scot – his towering presence at the opening of the Scottish Parliament and in 1999 showed his love for the country of his birth.’

Sir Sean was knighted by the Queen in 2000 and celebrated his 90th birthday in August.

From bricklayer to 007: Sean Connery enjoyed 50 year film career but he will undoubtedly be remembered as the first – and some say definitive – James Bond

He enjoyed a long and varied film career spanning 50 years, but Sir Sean Connery will undoubtedly be remembered as the first – and some say definitive – James Bond.

His performance in Dr No in 1962 set the jobbing actor and former milkman on a path that would lead to Hollywood stardom and all its trappings.

Roles in Highlander, The Untouchables and Indiana Jones And The Last Crusade helped seal his position as one of Britain’s best-loved stars, and his brooding good looks and distinct Scottish brogue won him legions of fans worldwide.

Connery never lost his much-imitated accent despite his many years living abroad. From his home in the Bahamas, he remained a fervent supporter of independence for Scotland. 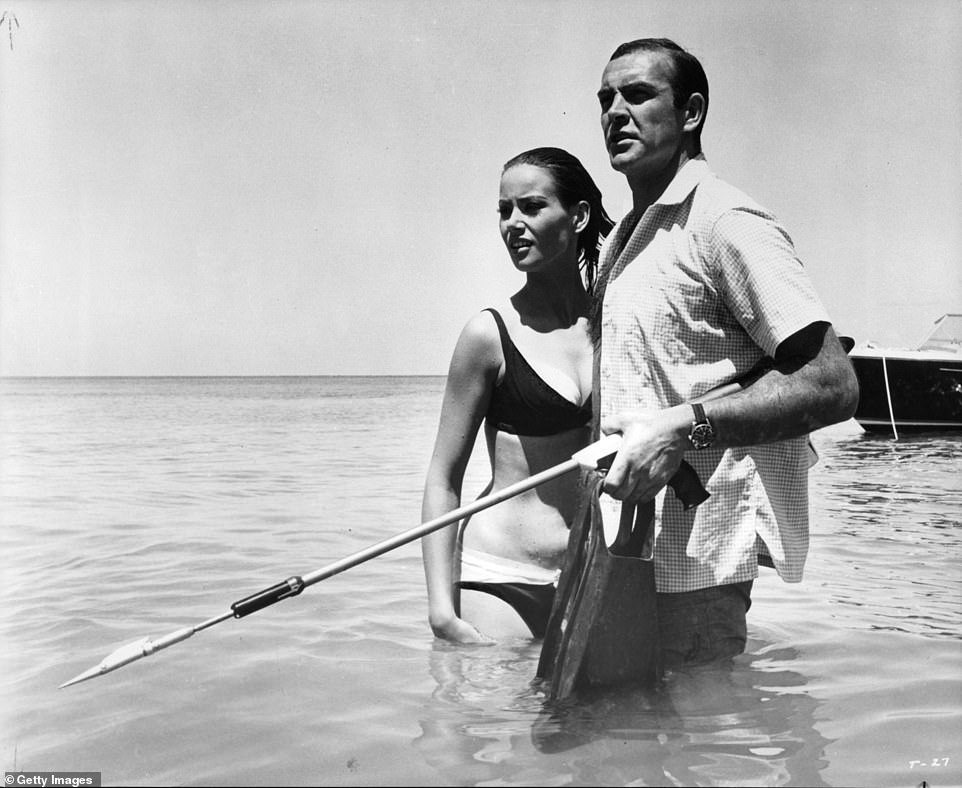 Claudine Auger standing with Sean Connery in the water in a scene from the film ‘Thunderball’, 1965

Thomas Sean Connery was born in Edinburgh’s Fountainbridge area on August 25 1930. The elder of two boys, he left school at an early age and took his first job as a milkman, complete with horse-drawn cart.

At 16 he enlisted in the Royal Navy but was discharged three years later on medical grounds after suffering with a stomach ulcer.

He has two tattoos from this time – one reading ‘Mum and Dad’ and another ‘Scotland Forever’.

The keen bodybuilder then undertook a variety of jobs, including a stint as a bricklayer, a lifeguard and an artist’s model for the Edinburgh College of Art. Under the name Thom Connery he was placed third in the tall man’s division (he was 6ft 2in) of the 1950 Mr Universe contest.

The stage came calling when a friend suggested he try out for a production of South Pacific. He got a part in the sailors’ chorus and so began his acting career.

He was also a gifted footballer. While touring with the musical, he was offered a contract by former Manchester United manager Sir Matt Busby, who saw him play in a friendly against a local side.

His first major acting credit came in 1957 British gangster film No Road Back.

It was author Ian Fleming’s suave and sophisticated secret service agent that launched Connery to stardom.

Fleming was initially resistant to the idea of Connery playing his character. He thought the Scot was an ‘overgrown stuntman’ who was not refined enough for the role.

He was later so impressed with his performance that he created a Scottish ancestry for the character in his subsequent books. 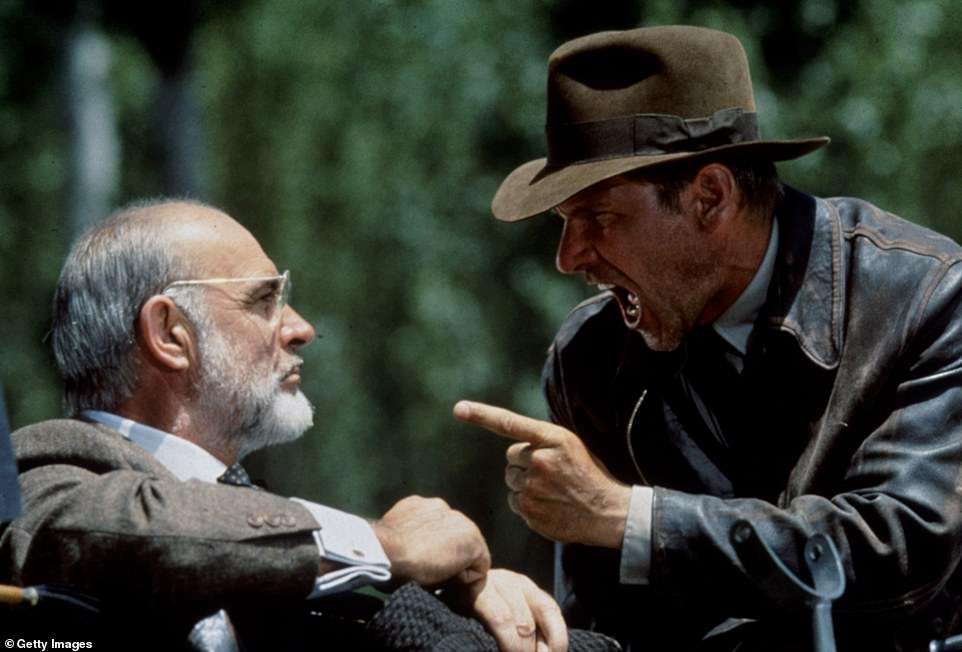 He is also fondly remembered for his part two years later as the father of Harrison Ford’s whip-cracking hero in Indiana Jones And The Last Crusade, the third instalment in the hugely popular franchise

He quit the role after You Only Live Twice, frustrated by the repetitive plots, but was enticed back after his successor George Lazenby failed to make the grade.

Most of his subsequent successes were as part of ensemble casts, in films such as The Man Who Would Be King, Murder On The Orient Express and A Bridge Too Far.

In the 1980s a slipping career was revived with The Untouchables (1987), with his role as a tough gangbusting Irish policeman winning him an Academy Award for best supporting actor. Future Oscar winners Morgan Freeman and Denzel Washington were also nominated in the category that year.

He is also fondly remembered for his part two years later as the father of Harrison Ford’s whip-cracking hero in Indiana Jones And The Last Crusade, the third instalment in the hugely popular franchise.

Connery could by now command massive fees and gained a reputation as a ruthless contract negotiator. He hated the idea of being manipulated by the film industry and was regularly embroiled in lawsuits.

In 1989 the US magazine People voted him Sexiest Man Alive, to which the 59-year-old replied: ‘Well, there aren’t many sexy dead men, are there?’

The 1990s brought performances in The Hunt For Red October (1990), Dragonheart (1996) and Entrapment, the 1999 love story/thriller with Catherine Zeta-Jones, which Connery also produced.

By now he was firmly regarded as an elder statesman of the film industry and in 2000 was knighted by the Queen – an honour said to have been delayed by his vocal support for the Scottish National Party (SNP).

Connery, once voted the ‘greatest living Scot’, received the American Film Institute’s Lifetime Achievement Award in 2006, when he confirmed his retirement from acting.

Throughout his career he remained relatively guarded about his private life but was forced to deny claims of domestic abuse made by his first wife, the Australian actress Diane Cilento, before her death in 2011.

He was plagued by criticism of remarks he allegedly made in a Vanity Fair interview in 1993 when he suggested there were women who ‘want a smack’.

Connery was reported as saying: ‘There are women who take it to the wire. That’s what they are looking for, the ultimate confrontation.’

He and Cilento were married for 11 years and had one son, the actor Jason Connery.

Connery is succeed by Jason and his second wife, French artist Micheline Roquebrune, whom he married in 1975 and who regularly accompanied him on the red carpet.

In 2009 he was awarded an honorary doctorate from Edinburgh Napier University for the achievements throughout his career.

He appeared relaxed and in good health during his last public appearance, when he turned out to support fellow Scotsman Andy Murray at the US Open in September 2012.

The tennis star was shocked when Connery and Sir Alex Ferguson gatecrashed a post-match press conference in New York and posed for pictures with him and his mother Judy.

As one of the most high-profile supporters of Scottish independence, many expected Connery to make an appearance on the campaign trail in the run-up to the historic vote on September 18 2014.

His words were used to galvanise support at the launch of the Yes campaign two years previously, when the star declared in a message: ‘The people of Scotland are the best guardians of their own future.’

The death of the 90-year-old was confirmed by his family on Saturday.