Lisa E. Gordon-Hagerty was confirmed by the U.S. Senate in February 2018, and was the first woman to hold the position at the agency that oversees the nation’s nuclear arsenal.

Dr. William Bookless, who served as NNSA principal deputy administrator, will take over as acting NNSA administrator, “ensuring the continuity of NNSA’s vital mission to sustain the safety, security and effectiveness of our nuclear deterrent and strengthen our national security,” the agency said in a release.

Gordon-Hagerty “oversaw the modernization of NNSA’s infrastructure and the strengthening of its world-class workforce,” the release said. “She also made significant strides in improving NNSA governance and management and demonstrated a sincere dedication to the 50,000 men and women serving in the national security workforce.” 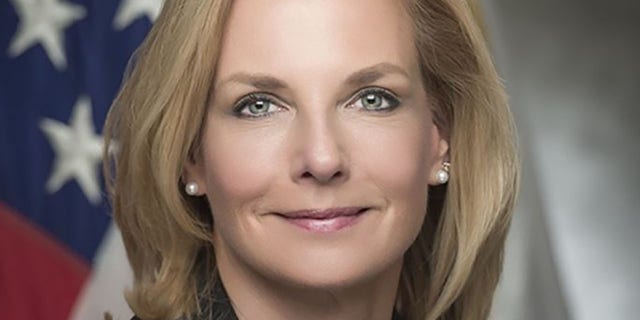 Lisa E. Gordon-Hagerty was confirmed by the U.S. Senate in February 2018, as the head of the National Nuclear Security Administration (NNSA)

The agency didn’t give a reason for Gordon-Hagerty’s resignation but it came after months of tensions between her office and Secretary of Energy Dan Brouillette, according to Defense News.

The NNSA is a semi-autonomous agency within the U.S. Department of Energy responsible for enhancing national security through the military application of nuclear science, according to NNSA’s website.

In September, a bill called the Department of Energy Organization and Management Improvement Act was passed by the House Committee on Energy and Commerce, which put the NNSA more fully under the DOE’s control, Defense News reported.

The move was reportedly seen as an effort by Brouillette to get rid of the NNSA.

“A short while ago, I spoke with Administrator Gordon-Hagerty, who is an exemplary public servant and remarkable leader of the National Nuclear Security Administration,” Inhofe said in a statement released by his office Friday. “That the Secretary of Energy effectively demanded her resignation during this time of uncertainty demonstrates he doesn’t know what he’s doing in national security matters and shows a complete lack of respect for the semi-autonomous nature of NNSA.”

Gordon-Hagerty’s departure coincided with two other Trump administration changes, NPR reported. Bonnie Glick, deputy administrator of the U.S. Agency for International Development, was replaced by the acting administrator John Barsa; and Neil Chatterjee, chairman of the Federal Energy Regulatory Commission and a former aide to Senate Majority Leader Mitch McConnell, was moved to a different role inside FERC, according to NPR.