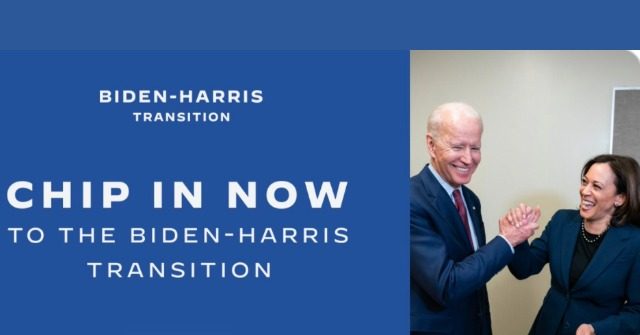 Former Vice President Joe Biden is soliciting donations from supporters to cover the expenses of the transition process as Republicans continue to dispute the 2020 White House contest.

Biden, who has been declared president-elect by multiple media outlets, has begun running targeted fundraising ads on social media, soliciting contributions to help pay for the transition.

“Because President Trump refuses to concede and is delaying the transition, we have to fund it ourselves and need your help,” one ad reads. “If you’re able, chip in to help fund the Biden-Harris transition.”

Here’s the deal: Because President Trump refuses to concede and is delaying the transition, we have to fund it ourselves and need your help.

If you’re able, chip in to help fund the Biden-Harris transition. https://t.co/apJMrdpoSS

The ads come as the results of the presidential election continue to be disputed. President Donald Trump and his allies claim that Biden’s media-declared victory is improper given that the former vice president only has marginal leads in several prime swing states. For instance in Arizona, which was called for the Democrat ticket on Election Night, Biden’s lead has diminished to less than 11,000 votes.

Similarly, Biden holds narrow leads over Trump in Georgia, Wisconsin, Nevada, and Pennsylvania. In all of those states, which are central to the former vice president’s pathway to hit the required 270 Electoral College votes needed for victory, allegations of electoral irregularities have emerged. As such, the Trump campaign has filed legal challenges to the preliminary results from each state.

Given the electoral irregularities and ongoing litigation, the General Services Administration has not yet officially recognized Biden as the winner of the 2020 contests. The agency acknowledgment is required for the formal transition process to commence.