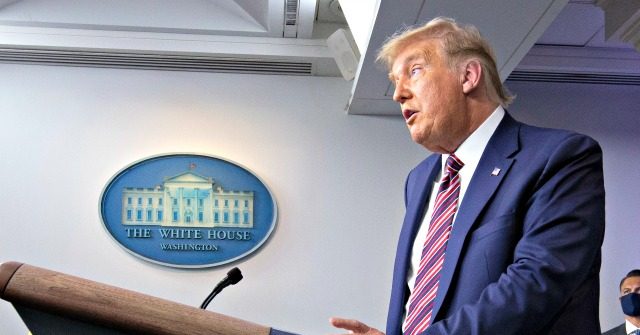 President Donald Trump accused pharmaceutical companies Friday of purposely delaying a coronavirus vaccine until after the election, in order to prevent his reelection.

“Pfizer and others even decided to not assess the results of their vaccine, in other words, not come out with a vaccine, until just after the election,” Trump said.

The president accused the companies of purposely delaying the vaccine results, noting that they had planned to assess the data as early as October, but postponed it.

“So they waited and waited and waited, and they thought they’d come out with it a few days after the election, and it would have probably had an impact, who knows, maybe it wouldn’t have,” Trump said. “I’m sure they would have found the ballots someplace … the Democrats.”

The president said that “Big Pharma” was against his re-election because of his decision to level new rules against the industry to reduce the cost of prescription drugs.

Trump promoted the new regulations on Friday at a press statement at the White House.

Trump said that drug companies ran millions of dollars of ads against his campaign because of what he planned to do to reduce drug costs.

One rule, announced by the president, would force companies to let Medicare pay the same “favored nation” price as the low prices in other countries.

A second rule requires pharmaceutical companies to cut out the middlemen on rebates and discounted drugs and send the savings directly to Medicare patients.

The rules go into effect in January.

The Trump administration estimates that the new rules save American taxpayers and beneficiaries more than $85 billion over seven years.