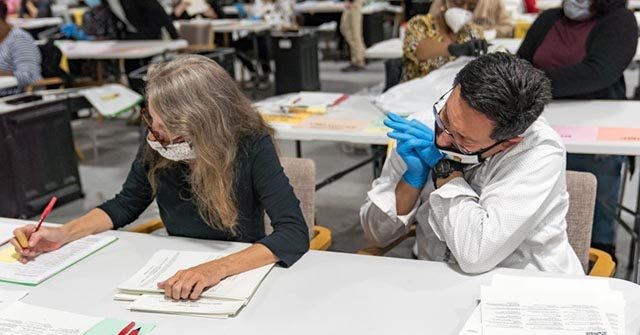 Maricopa County Superior Court Judge John Hannah dismissed a petition from the Republican Party of Arizona on Thursday asking for a hand count audit of the votes in Maricopa County based on precinct rather than by voting centers.

Last week, the Republican Party of Arizona announced a legal challenge, demanding a hand recount of votes by precinct rather than by voting centers, citing the “fundamental difference” between the two.

“[The] most notable being the fact that there were only around 175 voting centers in this election but there were 748 precincts,” the Republican Party of Arizona said in a statement at the time.

Hannah dismissed the petition on Thursday.

“We brought this suit because the statute is clear that to audit, hand audit the electronic count, it is supposed to be done by precincts,”  Republican Party of Arizona Chairwoman Kelli Ward said in a Friday update.

“There are 748 precincts while there are only 175 voting centers, so theoretically there would be a larger sample of votes that needed to be hand-counted to adjudicate, or to check on the machine count of these ballots,” she added:

In a formal statement, Ward called for a “full hand count audit” of the state’s election results:

This election has been fraught with tension as voters were forced to adjust to new election procedures put in place because of COVID-19, as well as organized efforts by Democrats across the country which helped lead to a wildly different voting process than in years past. Here in Arizona, we have identified problems in our own process where the will of a Democrat Secretary of State is being substituted for the black letter law passed by the State Legislature.

Our most recent lawsuit sought judicial clarification on the question of whether the Secretary of State’s Elections Procedures Manual would be allowed to supersede state statute. Unfortunately, this ruling instead makes clear to Arizonans that they must ensure that this issue is addressed with new legislation that clearly outlines the parameters in which the Secretary can and cannot impose their own interpretation of our laws in the future.

Arizona voters deserve to have complete trust in their election procedures. They should also have supreme confidence that only legal ballots were counted in the 2020 election. Failure to address their concerns actively harms our state and our nation. Because of this, I stand by my call for a full hand-count audit of our state’s election results.

Our response to today’s order by Judge Hannah rejecting our request for a legal hand-count audit at the precinct level: pic.twitter.com/1cq9phV1Yh

Me and the great @RepAndyBiggsAZ got something to say about the election. Check out the video. https://t.co/5nRkrlXw9K