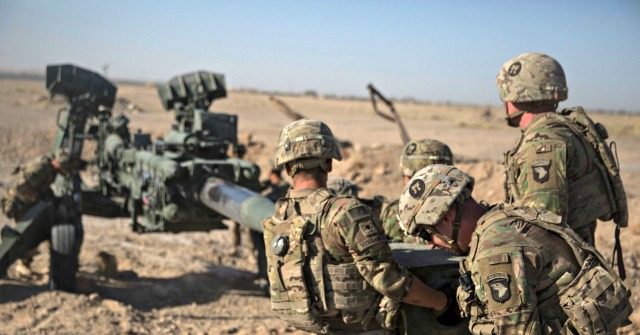 Both Republicans and Democrats at the hearing expressed reservations about the decision, which was announced last week at the Pentagon by Acting Defense Secretary Chris Miller, in accordance with Trump’s goal to end the war in Afghanistan.

Republicans and Democrats on the committee expressed concern about whether 2,500 troops were too few to stave off a takeover of the country by the Taliban, to conduct the U.S. counterterrorism mission there, and to prevent al Qaeda from plotting another 9/11 from within its borders.

Rep. Jackie Speier (D-CA) even raised the prospect of reversing Trump’s decision and sending U.S. forces back into Afghanistan:

I worry about the reinstatement of Sharia law and the impacts on women and children and I worry that we have to calibrate what a presence that will be relevant is. Is 2,500 enough, or do we need 4,000? Can we reinstate the other 2,000 after the Biden administration comes into operation if that is where he’s inclined to go?

There was little support for drawing down forces from the hearing’s three witnesses, who all opposed Trump’s decision.

“It is, I am afraid to say, folly to think that a full U.S. troop withdrawal is somehow going to make us safer or uphold our core values,” said Ryan Crocker, a retired career ambassador and nonresident senior fellow at the Carnegie Endowment for International Peace. “We have to show the strategic patience we need to face down a determined enemy.”

“In my view, we should maintain our current troop level chiefly for its political value as bargaining leverage in the ongoing talks between the Afghan government and the Taliban,” said Stephen Biddle, professor at Columbia University and adjunct senior fellow at the Council on Foreign Relations.

“I think the U.S goal should be to continue to build political consensus in Afghanistan to support peace talks and at least to prevent the overthrow the Afghan government by the Taliban,” said Seth Jones, an expert with the Center for Strategic & International Studies thinktank.

Only two lawmakers at the hearing expressed opposition to keeping U.S. forces in Afghanistan.

On the Democrat side, it was House Armed Services Committee Chairman Adam Smith (D-WA), who raised questions about the costs and effectiveness of having U.S. troops in the country, although he stopped short of making any definitive statements.

“Outside forces are not going to bring peace to Afghanistan. One way or the other, the people of Afghanistan are going to have to make that choice. And when we look at Afghanistan, I think we need to be very humble about imagining that there is something we can do to make that different,” he said, adding:

If you tell me I got to bet $100 dollars one way or the other, I’m betting rather confidently that the chaos is going to continue. And we are in the middle of that chaos…Lives are being lost, money is still being spent, and people — our troops and others — are still being forced to be sent over there, and I think the American people are saying, ‘For what?’

Only Rep. Matt Gaetz (R-FL) unequivocally said he was opposed to keeping U.S. troops in Afghanistan. He noted that as a Republican member of the committee and supporter of withdrawing U.S. forces from the country, he was “a minority” with a “minority view” on the U.S. war in Afghanistan.

“I’m against it. Based on even the words of our own witnesses today, the corruption in Afghanistan is unsolvable, the war in unwinnable, and the strategy is undecipherable,” he said.

“I listened intently as Dr. Biddle said, ‘We’re leaving, and we’re getting nothing.’ Well, what we’re getting is out,” he said. “To me, the biggest loser in Afghanistan is the nation that stays the longest.”

“This has been the longest war in our nation’s history. Our country is weary of it, even if the House Armed Services Committee is not,” he added.

.@MattGaetz at House hearing in Afghanistan drawdown: “This has been the longest war in our nation’s history. Our country is weary of it, even if the House Armed Services Committee is not.”

Some other lawmakers also questioned the costs of the war, but stopped short of calling for forces to come home.

The opposition from Congress to drawing down troops comes despite broad public support for bringing U.S. troops home from Afghanistan — nearly 70 percent of Americans, according to a YouGov/Charles Koch Institute poll in January.

Trump campaigned on ending the war in Afghanistan and has reduced the number of U.S. troops there from 8,600 when he first took office, to 2,500 currently.

Former President Barack Obama also campaigned on ending the war in Afghanistan, but raised the number to as many as 100,000 forces in the country, before leaving 8,600 forces there.

The war began in October 2001, after al Qaeda leader Osama Bin Laden used Afghanistan as a safe haven to plan and launch the September 11, 2001, attacks against the U.S. The U.S. routed the Taliban, who had granted Bin Laden safe haven.

However, the U.S. and allied nations then became mired in a nation-building campaign as the Taliban reconstituted and launched an insurgency against them.

More than 2,400 U.S. military and Defense Department civilians have died in Afghanistan since 2001, and another 20,721 have been wounded.