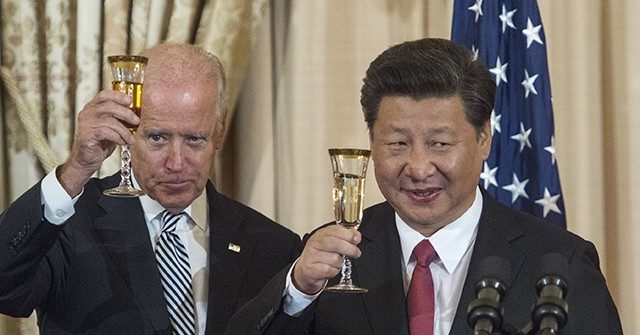 American companies that do business and make their products in China are, by a majority, “optimistic” about a Joe Biden presidency, a new survey reveals.

The American Chamber of Commerce in a Shanghai, China, survey asked 124 business executives their opinions on a Biden presidency, to which a majority, nearly 63 percent, said they are “much more optimistic” or “more optimistic” about their doing business in the Communist country with the former vice president in the White House.

Likewise, the survey found that business executives do not expect Biden to impose more tariffs on China-made products — as President Trump did with billions of dollars worth of goods against the wishes of corporate interests.

Under a Biden administration, only 5.6% of AmCham Shanghai survey respondents expect more tariffs. Instead, 70.2% anticipate new U.S. leadership will work more with other countries to put pressure on trade relations with China. [Emphasis added]

In August, Biden seemingly claimed he would repeal Trump’s tariffs on Chinese products. Later, his campaign aides walked the statement back, and he has since not been definitive on whether he plans to keep the tariffs or throw them out.

Already, the Business Roundtable, which represents some of the nation’s largest multinational corporations, is pushing Biden to ease the tariffs imposed on Chinese products by Trump, according to the Wall Street Journal:

“Unwinding the tariffs, especially with China, shouldn’t be a unilateral act,” said Josh Bolten, the BRT’s chief executive. “It should be an opening to begin a serious negotiation that the Trump administration attempted but in many respects made difficult through overly aggressive measures.” [Emphasis added]

On Monday, former George W. Bush administration Treasury Secretary Hank Paulson made a proposal similar to Mr. Bolten’s. “I would only remove existing tariffs when we have extracted a reciprocal and tangible benefit from China, met by defined benchmarks in a phased bilateral trade agreement,” he said at conference. [Emphasis added]

Myron Brilliant, the U.S. Chamber of Commerce’s executive vice president, added his voice to the rollback call on Tuesday. “We would hope that China would agree to the importance of further efforts on structural reforms unaddressed by the phase-one agreement,” he said in an interview, “and that the U.S. and China can find the political space to pull back tariffs that are currently in place.” [Emphasis added]

Biden has promised the opposite approach to China that Trump has successfully implemented for almost four years. Whereas Trump’s focus was on an “America First” bilateral trade policy with other nation-states, Biden is promising the multilateral approach that has formed the Washington, D.C., free trade consensus for decades.

Many Senate Republicans have suggested that they are behind a return to the multilateral approach with Biden. Republicans on the Senate Foreign Relations Committee issued a report this week wherein they declared their support for Biden’s strategy, the Wall Street Journal reports:

“It is our populations—the U.S. and Europe—that built the world order of today, not China,” said Sen. Jim Risch, the chairman of the Senate committee, in an interview. “The world order that we have, based on democracy and based on the rule of law, is where this planet should go if it’s going to have a future.” [Emphasis added]

If Republicans retain control of the Senate, Mr. Risch will continue leading the chamber’s foreign-policy committee, which President-elect Joe Biden also chaired during his Senate career. The Idaho Republican said the report wasn’t timed with the election or presidential transition but that he would be willing to work with a Biden administration on confronting China with more help from Europe. [Emphasis added]

Andrew Bates, a spokesman for the Biden transition team, said: “President-elect Biden agrees that we should stand together with our allies and partners to press China’s government to curtail its economic, human rights, and other abuses. And he looks forward to working with both parties in Congress to realize that approach.” [Emphasis added]