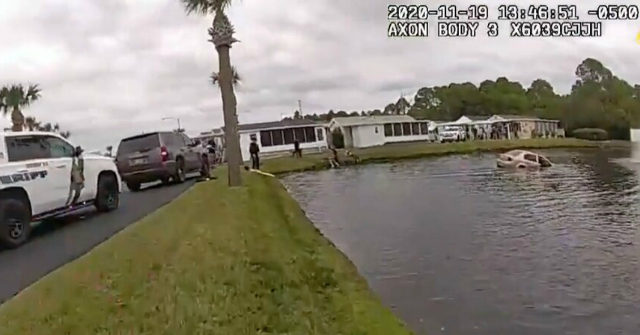 A 30-year-old Florida drug dealer suspect led police on a car chase Thursday afternoon that ended when he crashed the vehicle, with children inside, into a pond inside the trailer park he was speeding through, according to a video.

Good Samaritans and deputies were on hand to pull everyone out of the water, and no one was injured, the Tampa Bay Times reported.

The chase lasted about a minute and ended with the sound of squealing tires and a splash in the water.

Deputies also stated the chase started around 3:00 p.m. on U.S. 19 heading southbound when officers tried to pull over Deloach for a window tint violation.

The suspect made a right, but deputies said he did not stop for the officers when they turned on the siren and flashed their emergency lights.

Instead, Deloach entered the Ja Mar North travel park and took horseshoe-shaped winding roads that took him back to his original destination.

That is when deputies said Deloach lost control of the vehicle and plunged it into the pond.

Bystanders filming the event cheered as it crashed, but then things started to turn serious when they realized there were children in the car.

“Oh my God, they’ve got a baby in the car,” someone can be heard saying on the video, as a woman pulled a child out of the passenger side window. Within seconds, another child climbed out of the window.

At least two Good Samaritan bystanders jumped into the water headed for the car, followed by one deputy, according to the video.

Deloach was also pulled from the car and raised his hands as he waded toward the shore.

Deloach was booked into the Pasco County Jail, where he is being held without bond.