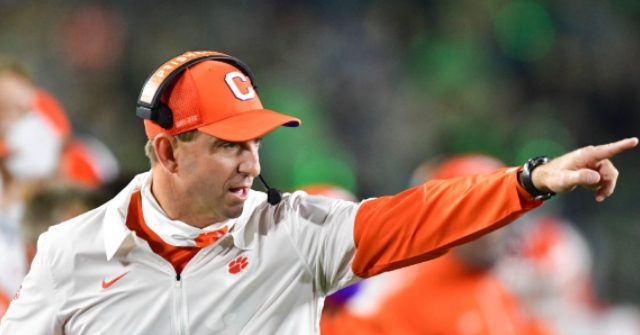 The Florida State Seminoles declined to play their scheduled game against Clemson this weekend, they claim, because of concerns over a player who tested positive for the coronavirus.

“Florida State officials decided to cancel their game against Clemson on Saturday, three hours before kickoff with the Tigers already in Tallahassee, after learning that a Clemson backup offensive lineman had tested positive for COVID-19,” Outkick reported. “The offensive lineman had practiced earlier in the week when he had symptoms, but had not tested positive, and he traveled with the team.”

That explanation did not go over well with Clemson coach Dabo Swinney who claims Florida State, in actuality, forfeited the game.

Dabo Swinney is really upset: “This game was not canceled because of COVID. COVID was just an excuse to cancel the game.” Says FSU administration forfeited the game. If FSU wants to play Clemson, they can home to Death Valley, he says. Or they can pay for Clemson’s travel.

Dabo: “This game was not canceled because of COVID. COVID was just an excuse to cancel the game. … To me, the Florida State administration forfeited the game.”

Dabo Swinney on if FSU was concerned about COVID-19: “If that was their worry, they shouldn’t have even played this season.”

Dabo Swinney, “The standard to cancel a game was not met. I was on every committee call for months since March. The only thing we talked about in canceling games was not having enough guys or seven offensive lineman.”

Swinney’s primary contention seems to be that travel rosters were initiated in preseason planning sessions, to account for late positive tests among players. If the expanded rosters are available, why weren’t they used?

The ACC has yet to determine when or where the game will be played.