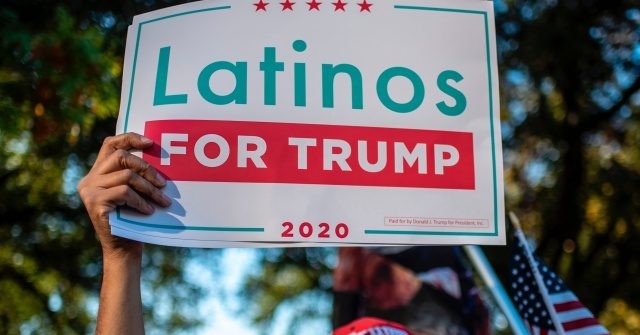 President Trump’s message on the 2020 presidential campaign trail — focused on the defense of law enforcement and the working class, and against globalization — resonated massively with the nation’s growing Hispanic American population.

Election data reviewed by Politico reveals that in 78 of the nation’s 100 majority-Hispanic counties across the United States, Trump improved his margins compared to the 2016 presidential election. Trump also improved his margins with Hispanic Americans “in exit polls of each of the top 10 battleground states,” Politico reports.

The improvement, the data indicates, is a result of Trump’s anti-globalism message that resonates with large swaths of working class Hispanic Americans who largely support police officers.

Key focuses of Trump’s campaign this cycle included slamming Democrats for their attacks on police, defending the interests of American workers against foreign competition in the labor market, attacking China for their domination in the world economy and the economic elites who have aided their rise for decades.

But, in interviews with more than a dozen experts on Hispanic voters in six states, no factor was as salient as Trump’s blue-collar appeal for Latinos.
[Emphasis added]

“Most Latinos identify first as working-class Americans, and Trump spoke to that,” said Josh Zaragoza, a top Democratic data specialist in Arizona, adding that Hispanic men in particular “are very entrepreneurial. Their economic language is more aligned with the way Republicans speak: pulling yourself up by your bootstraps, owning your own business.” [Emphasis added]

Most prominently, the data indicates that many Hispanic Americans were turned off by Democrats’ wide embrace of Black Lives Matter, an anti-police movement, and the use of so-called “woke” terminology such as the gender-neutral “Latinx” lingo that is often deployed by white liberals.

One Democrat strategist noted to Politico that about 97 percent of Hispanic Americans do not use the term “Latinx.” On the Black Lives Matter movement, the data found that Hispanic Americans were “as receptive as non-Hispanic whites to a pro-police and pro-jobs message.”

Part of that message included defending police officers, nearly all of which come from working and middle class backgrounds, and supporting American industries and American workers over global interests.

A Hispanic Democrat activist who spoke to Politico said for third-generation Hispanic Americans, their putting the interests of illegal aliens and foreign nationals over that of American citizens is baffling.

Exit polling conducted by Zogby Analytics for the Federation for American Immigration Reform (FAIR) found that Hispanic voters — including those who voted for Democrat Joe Biden — are overwhelmingly supportive of reducing overall legal immigration to the U.S., nearly as much as white Americans.

Similarly, 6-in-10 Hispanic voters said overall legal immigration should be reduced even after the U.S. recovers from its unemployment crisis to “protect American jobs” for Americans. This is only a six percent difference between white Americans who support the policy.

Hispanic Americans also were very supportive, 80 percent, of shutting down the nation’s borders to slow the spread of the Chinese coronavirus. Even 8-in-10 Democrats supported the actions Trump took to close the U.S.-Mexico and U.S.-Canada borders.