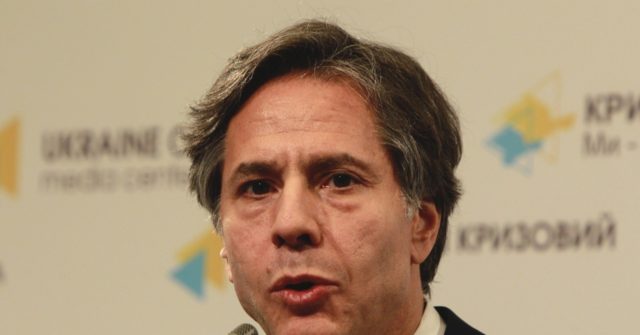 Former Vice President Joe Biden is reportedly set to announce this week that Tony Blinken, who supported the idea of “Russia collusion,” would be his Secretary of State.

President-elect Joe Biden intends to name his longtime adviser Antony Blinken as secretary of State, according to three people familiar with the matter, setting out to assemble his cabinet even before Donald Trump concedes defeat.

In addition, Jake Sullivan, formerly one of Hillary Clinton’s closest aides, is likely to be named Biden’s national security adviser, according to two people familiar with the matter. An announcement is expected Tuesday, the people said.

Blinken, who served as deputy secretary of state and deputy national security advisor under President Barack Obama, has also been a New York Times opinion writer and a “global affairs analyst” for CNN. In that capacity, he supported the “Russia collusion” hoax.

As Breitbart News reported in 2017, Blinken told CNN: “The president’s ongoing collusion with Russia’s plans is really striking, intentional or not.” He said that Russia had sown doubt about American elections and institutions.

(Subsequently, an investigation by Special Counsel Robert Mueller found no evidence of any collusion between Russia and the Trump campaign.)

Blinken also apologized earlier this year to left-wing anti-Israel radical Linda Sarsour, regarded by many critics (even on the left) as an antisemite, after the Biden campaign tried to distance itself from her views.

He is also married to Evan Ryan, a former aide to then-First Lady Hillary Clinton. Ryan worked for Clinton at a time when Clinton’s chief of staff, Margaret Williams, acknowledged accepting a campaign donation from entrepreneur Johnny Chien Chuen Chung.

Chung said that the donation was meant to help Clinton pay for Christmas receptions for the Democratic National Committee at the White House, in exchange for “VIP treatment for a delegation of visiting Chinese businessmen,” according to the Los Angeles Times.

Biden is expected to name several potential Cabinet nominees in the coming days.