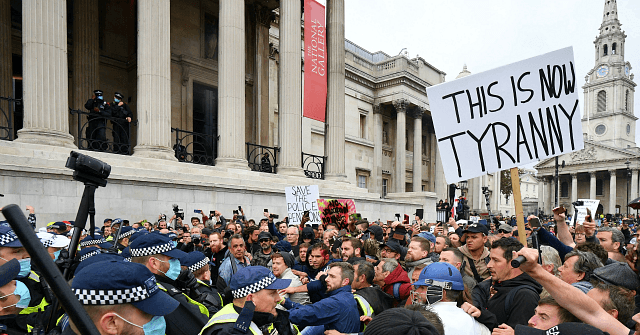 Lord Sumption has condemned “control freaks” of the political, academic, and bureaucratic class “behaving as if our lives belonged to the state”.

Lord Sumption, who served as a Justice of the Supreme Court of the United Kingdom from 2011 to 2018 and is still a member of the court’s Supplementary Panel, wrote that the “debate about whether to let us have a family Christmas perfectly sums up what is wrong with this Government’s handling” of the Chinese coronavirus pandemic in an article for the Mail on Sunday.

The prominent jurist and historian said that those who wish “isolate themselves with a meal alone” should be respected, but that there are “many different answers to the dilemmas of a Covid Christmas” — and that, ultimately, the important question is not whether those who wish to connect with their families or those who wish to limit outside contact are making the more prudent choice, but “whether we should be allowed to make the choice for ourselves, instead of having it imposed on us by law.”

“But for the Jacobins of the Scientific Advisory Group for Emergencies (SAGE) and the control freaks in the Department of Health, theirs is the only answer,” he said, referencing the faction which took control of Revolutionary France after the monarchy was overthrown, and soon after set up a Committee of Public Safety and began terrorising all who questioned its agenda into submission.

WHO: Have Christmas Picnic in Park Instead of Family Dinner to Stop Corona Spread https://t.co/DBT9uKYdKB

Sumption was particularly contemptuous of Prime Minister Boris Johnson, whose policies, he suggested, are an exercise in “public relations management” rather than an attempt at good government.

“Boris Johnson knows that restrictions over Christmas would be deeply unpopular, widely ignored and catastrophic for the retail and hospitality industries.

“So he will soon announce their temporary suspension, behaving as if our lives belonged to the state and Christmas was an act of indulgence on his part,” the judge predicted.

He further predicted, however, that the “control freaks and the rest of the sackcloth and ashes brigade will demand a payback” afterwards, claiming that some “are already pressing for two, three or even five days of extra lockdown for every day of release over Christmas. ”

Indeed, Breitbart London has previously reported how the public health establishment have suggested that the price of as little as five days of relaxed restrictions over Christmas may be as much as another full month of lockdown afterwards.

Boris Govt May Let Brits Have Five Days for Christmas – at Cost of ANOTHER Lockdown https://t.co/gGfPbkoYgK

Concluding, Lord Sumption denounced the state’s “insistence on coercing the entire population” as “morally and constitutionally indefensible in a country which is not yet a totalitarian state, like China.”

“The Government has not earned our trust. Sooner or later, people will take back control of their own lives and do the right thing, whatever Ministers say,” he added.

Some commentators, however, believe that the state is not going far enough in terms of imposing restrictions on the citizenry, arguing that any talk of relaxation over the Christmas season is irresponsible.

“So everyone gets Covid for Christmas!” exclaimed Good Morning Britain host Piers Morgan, in response to a report that Johnson was considering a 24-hour relaxation of the so-called “rule of six” for Christmas Day.

“Guy’s a genius,” he added sarcastically.

Mr Morgan has not always been so committed to the cause of social distancing, however, having insisted he was “proud” of his son for attending a packed Black Lives Matter rally in London in June.

Proud of my son for attending the #BlackLivesMatter protest which he found profoundly inspiring.
He told me he maintained social distancing as best he could in the large crowd. Not easy given many others weren’t, but I’m glad he tried. https://t.co/rdaIDaP9br