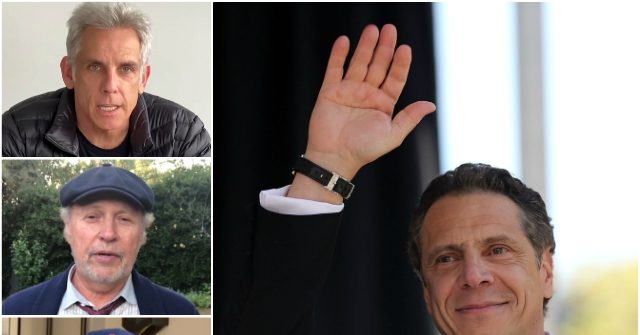 As New York prepares to go back under lockdown that could put thousands of people out of work, Gov Andrew Cuomo (D) accepted his International Emmy Award on Monday by claiming victory, saying that his daily coronavirus press conferences offered “authentic truth and stability.”

In what became a Cuomo love-in for the so-called “Love Gov,” a chorus of celebrities joined in to sing the governor’s praises. Stars including Robert De Niro, Billy Joel, Ben Stiller, Rosie Perez, Billy Crystal, and filmmaker Spike Lee  recorded video messages extolling the governor for setting “an example to the rest of the world.”

Absent from the ceremony was any mention of Gov. Cuomo’s March directive ordering New York nursing homes to accept COVID-19 patients, which caused the virus to spread like wild fire among that state’s elderly and infirm population. His decision contributed to the state’s COVID-19 mortality rate, which currently ranks as the second highest in the nation.

All of that was swept under the rug as International Emmys president Bruce Paisner introduced Cuomo during Monday’s virtual ceremony, saying that the governor” informed, he demanded, and he calmed people down.”

Gov. Cuomo then accepted the International Emmy’s Founders Award in what appeared to be a taped message.

“What an honor and pleasant surprise during these hard times,” he said. “I wish I could say my daily COVID presentations were well choreographed… they only offered one thing — authentic truth and stability. But sometimes, that’s enough.”

Cuomo concluded: “We will get through this together and we will be the stronger for it.”

During the presentation, celebrities sang Cuomo’s praises. Billy Crystal said that Cuomo “gave us hope, clarity, the truth,” adding that the governor was the “epitome of New York tough.”

Brooklyn native Rosie Perez said, “You are the man,” adding that the governor “offered your strength, leadership, direction” and
“set an example to the rest of the world.”

Ben Stiller joked that he didn’t know why Andrew Cuomo was receiving an Emmy when his brother, CNN host Chris Cuomo, is the one in the television business.

Host Richard Kind added to the praise: “[Cuomo] united New Yorkers, he united the country… He even united the world.”

Cuomo’s Emmy Award is part of a public-relations rehabilitation tour that includes his recently published book, American Crisis: Leadership Lessons from the COVID-19 Pandemic. As Breitbart News reported, his book fails to mention the number of nursing home residents who died in the state.