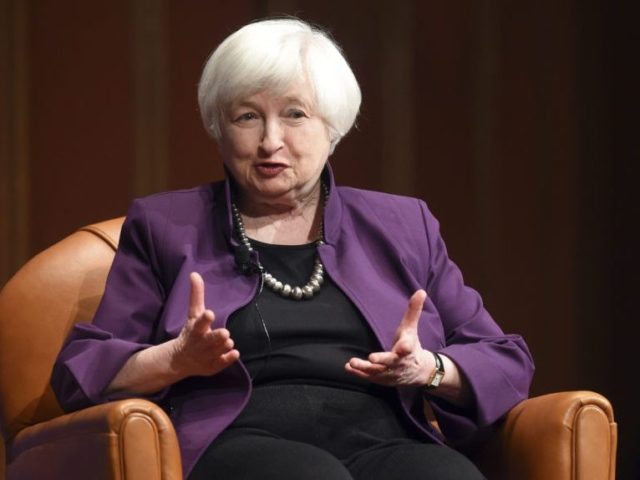 Joe Biden has purportedly settled on former Federal Reserve chairwoman Janet Yellen as his secretary of the treasury, according to the Wall Street Journal.

Yellen, who stepped down from the Federal Reserve in 2018, is a longtime Washington, D.C. insider, having served as chair of the White House council of economic advisers under former President Bill Clinton. If confirmed by the Senate, Yellen will be the first woman to helm the treasury department.

News of Biden’s decision to appoint Yellen, which has yet to be confirmed by the former vice president’s official transition team, comes as Congress and the Trump administration have been unable to negotiate another round of economic relief for individuals and businesses impacted by the novel coronavirus pandemic.

Although talks have intensified in recent weeks, Democrats, lead by House Speaker Nancy Pelosi (D-CA) and Senate Minority Leader Chuck Schumer (D-NY), are holding out for an expensive stimulus package that runs upwards of $2.2 trillion. The Trump administration, along with Senate Republicans, has proposed a smaller and targeted relief package, amounting to only $500 billion.

The gridlock appears unlikely to break at the moment, even though several coronavirus relief programs enacted earlier this year are set to expire in December.

Biden, for his part, has stood behind Democrats in their calls for a broader relief program. The former vice president’s choice of Yellen as treasury secretary, over more progressive figures like Sen. Elizabeth Warren (D-MA), signals that his administration will attempt to work with the congressional GOP upon taking office.

One particular area where Biden and Yellen could find common ground with Republicans, who appear poised to retain control of the Senate, will be on the deficit and national debt. The issue has particular resonance for Biden, who attempted to broker deals on the topic not only during the Obama administration but also as a senator in the 1970s and 1980s.

Yellen, herself, has spoken in recent months about the need to rein in the federal debt, arguing in February of this year that the United States’ current economic path was “completely unsustainable.”