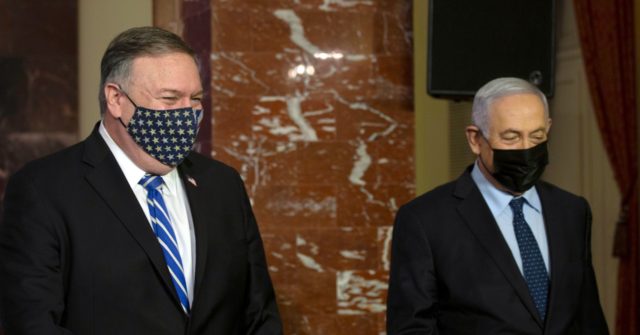 Netanyahu, who was accompanied by Mossad chief Yossi Cohen, was on the ground for five hours in Neom on Saudi Arabia’s Red Sea coast, the reports said.

Pompeo on Monday said he held a “constructive” meeting with Saudi Arabia’s crown prince the night before, but made no mention of Netanyahu’s presence.

“Pleasure to meet with Saudi Crown Prince Mohammed bin Salman. Our security and economic partnership is strong and we’ll continue to harness it to advance efforts to counter malign Iranian influence in the Gulf, economic goals under the Vision 2030 plan, and human rights reform,” Pompeo tweeted.

#SaudiArabia: ‘We have supported normalization with #Israel for a long time, but one very important thing must happen first: a permanent and full peace deal between Israelis and Palestinians,’ says Prince @FaisalbinFarhan, Saudi Minister of Foreign Affairs: pic.twitter.com/nKVDJfnxUX

Aviation tracking data showed that a private jet had made a brief trip from Tel Aviv to Neom.

The Kan public broadcaster said the jet belonged to businessman Ehud Angel, and was the same one used by the prime minister used for a secret visit to Oman last year.

It was Bibi’s ex-fav bizjet t7-cpx. Back to Tel Aviv after 5 hours on ground pic.twitter.com/Ty9aedYbsK

According to Haaretz, the private plane was the one Netanyahu took several times for his visits to Russian President Vladimir Putin.

Senior Hamas official Sami Abu Zuhri demanded an explanation from Saudi Arabia, calling the alleged visit “an insult to the nation and an invitation to attack Palestinian rights.”

The Kan public broadcaster reported the Saudi-Israeli talks focused on Iran and the incoming Biden administration. Stopping Iranian hegemony in the region is a shared goal between the two countries. Apparent president-elect Joe Biden has said he will return to the nuclear deal with Iran.