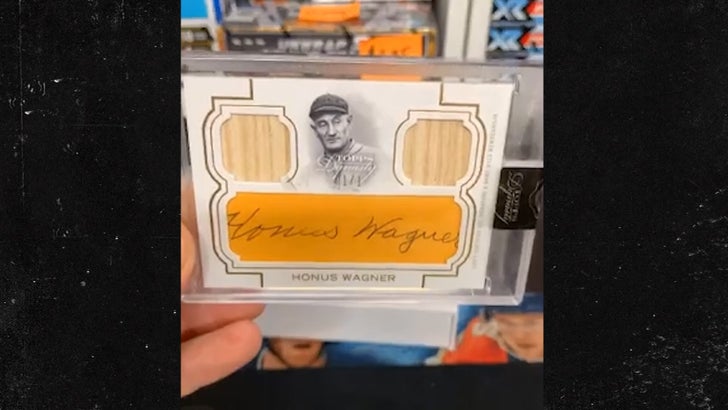 Rob Kardashian is ON FIRE — the sports card collector just pulled an ultra-rare Honus Wagner autograph … and the video is epic!

Here’s the deal … Rob K. has established himself as one of the top dogs in the high-end sports card market — often buying boxes of pricy, rare cards in the hopes of hitting big.

AND HE KEEPS HITTING BIG!!!

This time, Rob paid $750 for a chance at the contents of the BullPen BullChest at the Bullpen card shop in L.A.

Basically, 6 people pay $750 each to split the contents of the BullChest which is loaded with expensive PSA graded cards, boxes of unopened cards … sometimes just packs of rare cards.

The collectors get to select 1 item from the chest in an order that’s randomly selected by the shop.

This time, Rob was 5th to select (not the best position) — but it worked out for him this time!

Rob decided to pick an unopened box of 2020 Topps Dynasty cards — which usually runs around $500 and only contains ONE CARD!!

But, when the Bullpen staffer opened the pack (Rob was watching virtually on a live stream) … he went CRAZY when he realized he pulled a special 1-of-1 Honus Wagner auto!

Wagner died in 1955 — but the people at Topps secured an authenticated autograph used it as the base of a new card.

Unclear what it’s worth … but it’s fair to say Rob EASILY made back his investment!

As we previously reported, Rob recently pulled an ultra-rare Tom Brady card that some believe could sell for more than $200k!