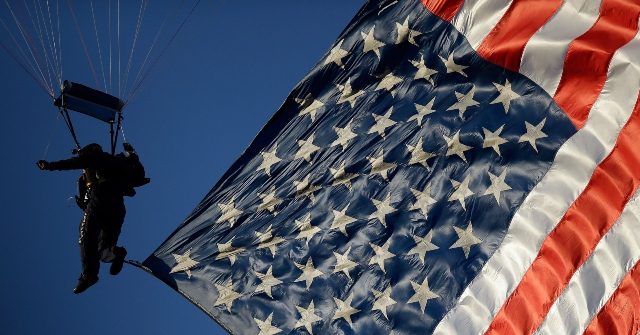 In an essay published on Friday, Teen Vogue columnist Kandist Mallett blasts America while calling for a range of radical motions and criticizing any notion of unity.

In the essay, titled “There’s No Such Thing As a United America,” Mallett writes that the U.S. is rooted in “divisiveness,” was founded “through the genocide of Indigenous peoples,” and flourished “through the enslavement of Africans.”

“At its core, America’s values are white supremacy and capitalism,” she writes. “That is true no matter who has been in office.”

Mallett describes former Vice President Joe Biden’s call for a “united America” as “nationalist propaganda,” stating that “Americans have never been united, and have been kept apart and pitted against one another by the state.”

“From geographic segregation to immigration bans and racist policing, the U.S. has privileged the lives and security of some residents at the expense of others,” she added.

While painting him as merely “the lesser of two evils” and far too moderate, Mallett also depicted Biden’s message of unity as undesirable.

“Why should people who have been systematically oppressed — and who have struggled against the government for true freedom — be asked to hold hands with their oppressors?” she asks. “Why are we still acting like we can get along with these people — or would we even want to?”

“Why should people who have been systematically oppressed — and who have struggled against the government for true freedom — be asked to hold hands with their oppressors?” https://t.co/LlivR9Kjdw

Reiterating her rejection of unity with those she disagrees with, Mallett writes:

“The only political unity that we should be trying to strive for is with those who are trying to build the world we actually need.”

Describing the moments that a Biden/Harris win became clear to her, Mallett claimed that she “didn’t feel excitement or even safety” but “exhausted,” claiming that a Biden presidency would “still be a battle.”

Though she feels she is “expected to celebrate that a Black woman is now next in line to be the head of an empire,” she writes: “I’m not.”

The essay calls out Democrats for “running to the center” instead of sticking up for their progressive base, followed by a tirade against “moderate” liberals and their policies.

The essay laments how calls to completely abolish the police were pushed aside in favor of “more mainstream calls to reduce funding for the police.”

Calling to fund “people’s basic needs through aggressive taxation on the 1%,” Mallett accuses the Biden team of “stacking itself with the same neoliberal figures who helped get us into the current mess we’re in.”

Mallett also writes that she does not wish for a “‘kinder’ capitalism” but rather “a society that ensures people’s basic needs — like housing, food, health care, and a clean environment — by creating programs like universal health care and de-privatization of housing.”

“For those of us who are systematically oppressed in this country, [politics] is not something we can choose to opt out of,” she writes.

In August, U.S. Rep. Dan Crenshaw, R-Texas, blasted Mallett over a July essay which called for the eventual end of private property rights while decrying the “cruelty of payment-based housing.”

“Teen Vogue publishes oped that says we should abolish private property rights…along with those pesky police,” Crenshaw wrote. “Just wondering if anyone sees any issues with our next generation reading Marxist propaganda in popular teen magazines…?”

“While we’re working to abolish the police, we must also work to dismantle what the police were put here to protect: property.” –@kandistmallett https://t.co/ubBIRMdpxb

Teen Vogue has a history of promoting radical leftist ideology to its young readership.

In June, the publication described the terrorist organization Antifa as a group that “aspires to create a better world” and fights “racists” in the wake of riots that had erupted across the country, many of which involved looting, vandalism, businesses being destroyed, beatings, and death.

Aside from the tragic loss of lives, the arson, vandalism and looting that resulted have been the most costly of any violent demonstrations in recent history, exceeding over a billion dollars in damages.