The Weeknd shocked many who tuned into the American Music Awards on Sunday when he showed up with a face covered in bloody bandages.

Fortunately, the musician, whose real name is Abel Tesfaye, was not in any kind of accident or altercation prior to the show. In fact, he’s been appearing in public with fake injuries since August when he accepted awards at the MTV Video Music Awards in a similar getup.

According to Yahoo Music, the bandages are part of a sort-of method acting move from the artist, whose VMA-winning music video for the hit song “Blinding Lights” shows him getting beaten up by bouncers and then injured in a drunk-driving accident.

The track belongs to the album “After Hours,” which the Weeknd explained to GQ is a concept album from the perspective of a “character losing his mind in Vegas.” In addition to getting bloodied in the “Blinding Lights” video, he also debuted his bloody-faced alter ego in “Heartless,” the album’s first music video in September 2019. All subsequent videos from the album have shared a similar theme.

It seems that The Weeknd is merely taking things to the next level with his fake injuries in each subsequent public appearance, with Sunday’s AMAs being the latest. Elle reports that the artist’s intention is to make a statement about the perils of drunk driving. 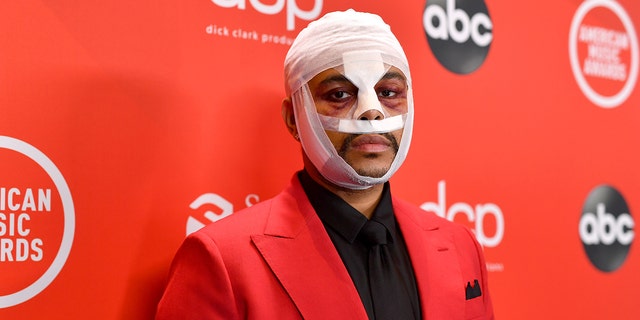 The Weeknd appeared at the 2020 AMAs with a bloodied and bandaged face. (Emma McIntyre /AMA2020/Getty Images)

He maintained the look as he accepted AMA Awards and even performed on a closed Los Angeles bridge alongside saxophonist Kenny G Sunday. The duo were on hand for a performance of The Weeknd’s songs “In Your Eyes” and “Save Your Tears.”

If the trend continues, it’s possible that The Weeknd will look even more battered when he takes the stage at the 2021 Pepsi Super Bowl Halftime Show. It was announced last week that the artist has been tapped to headline the highly coveted performance this year.

“The Pepsi Super Bowl Halftime Show is one of the most anticipated performances of the year and we are thrilled to welcome The Weeknd to the stage,” said Todd Kaplan, VP of marketing, Pepsi, in a press release obtained by Fox News.

“Pepsi has worked with some of music’s biggest artists over the years – from Prince to Lady Gaga, Beyoncé, Bruno Mars and most recently Jennifer Lopez and Shakira. After a year that’s largely been void of live music, we can’t wait to watch The Weeknd transform the world’s biggest stage with his limitless talent and creativity, delivering what will most certainly be an unforgettable performance that will be remembered for years to come,” he added.

“Performing on the iconic stage. see you 02/07/21,” the Grammy-winning musician, 30, wrote on Twitter. The Weeknd said he was “humbled, honored and ecstatic to be the center of that infamous stage.”

Fans can only hope that the artist avoids any real injuries between now and Feb. 7.