Coronavirus deaths in England continued rising into mid-November to 2,274 in the second week of the month, meaning the all-cause deaths were 19 per cent higher than usual for the time of year.

Office for National Statistics data published today shows that there were 1,833 ‘excess’ deaths in the week ending November 13, with a total of 11,495 people dying. Although higher than average, the figure is only just over half the 21,157 people who died of all causes in England’s worst week in April during the peak of the first wave.

The number of people dying with the viral infection is now on par with those succumbing to flu or pneumonia for the first time since June.

The coronavirus deaths recorded in the week that ended November 13 were a rise of 503 on the 1,771 recorded in the first week of the month. The most recent data is not likely to take into account any effects of lockdown.

Figures show that numbers of people dying of any cause is higher than average in all regions, with the northern parts of England still worst hit. In the North West deaths are 38 per cent higher than usual, driven up by a huge surge in Covid-19 infections, while in the South East they are only marginally higher at two per cent.

Hospitals, care homes and private homes are all seeing more fatalities than they would expect to at this time of year, and one in five deaths are now linked to Covid-19, compared to one in six a week earlier.

But the ONS data is backdated and known to be too old to reflect the current situation in the country.

Department of Health death counts, which take in daily totals from hospitals and care homes for the whole UK, suggest that the number of people being killed by Covid-19 has started to level off after a surge in October.

In the last three weeks of October, from the 10th to the 31st, the average number of people dying with coronavirus each day soared four-fold from 63 to 259, while in the first three weeks of November it rose far more slowly – by 57 per cent from 260 to 409.

There are signs of a flattening in the trend, although experts have warned deaths will likely stay in the hundreds per day for weeks to come as the effects of huge numbers of infections in October and early November continue to trickle through. It takes an average of two to three weeks for a victim to die after they catch the virus. 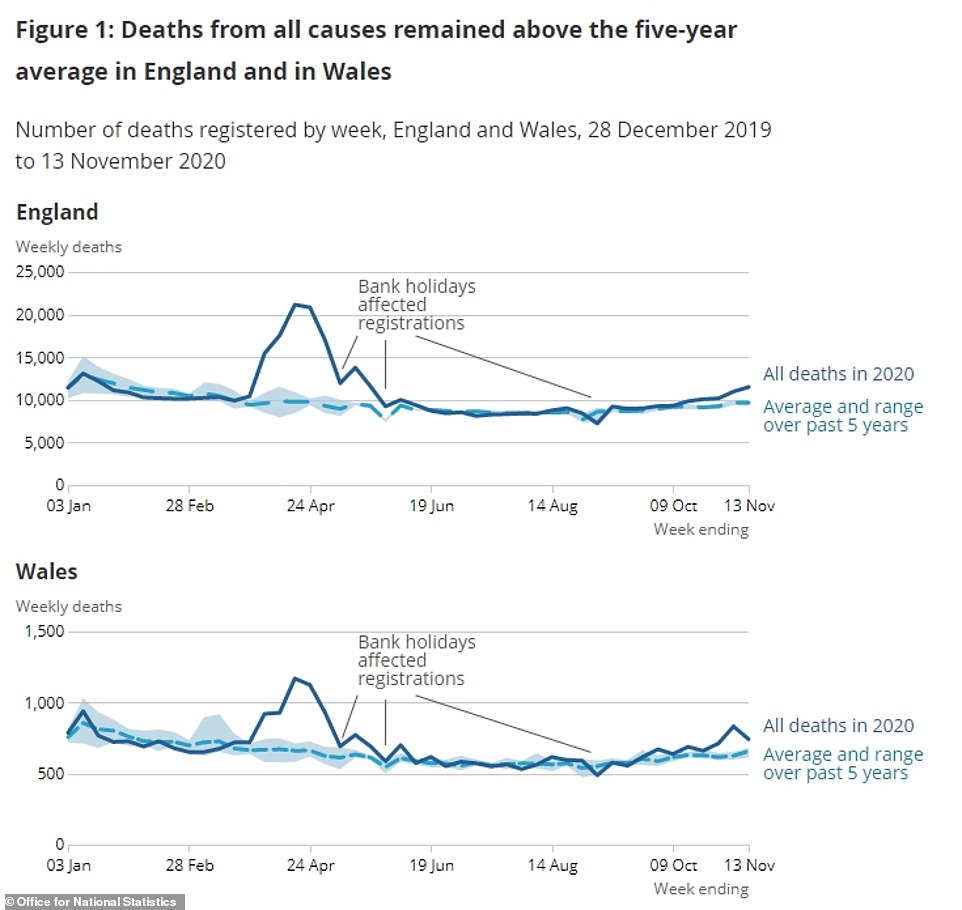 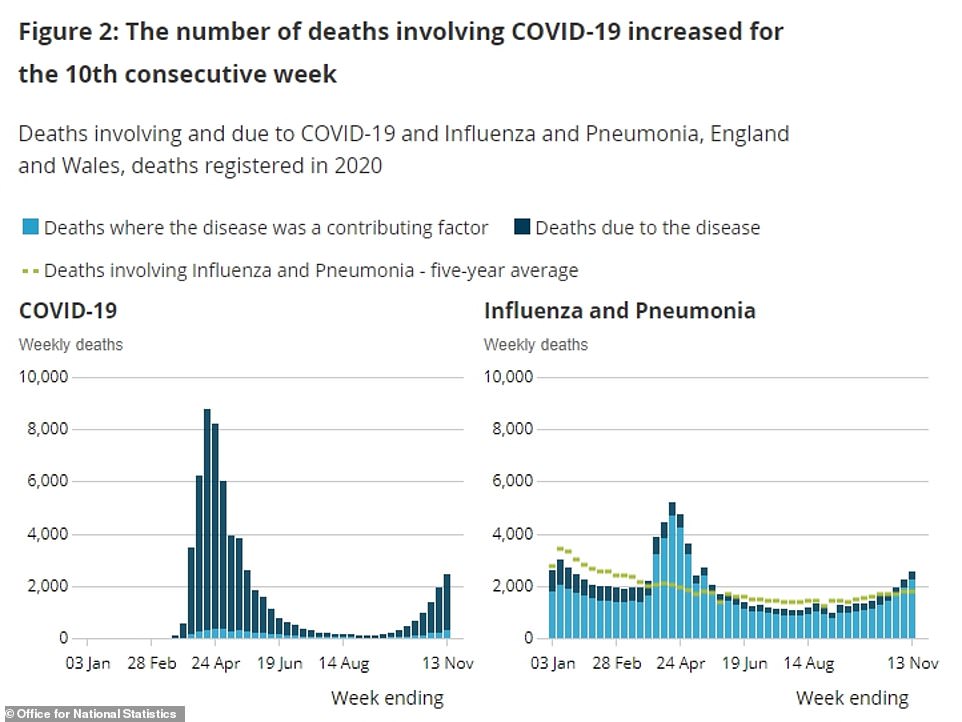 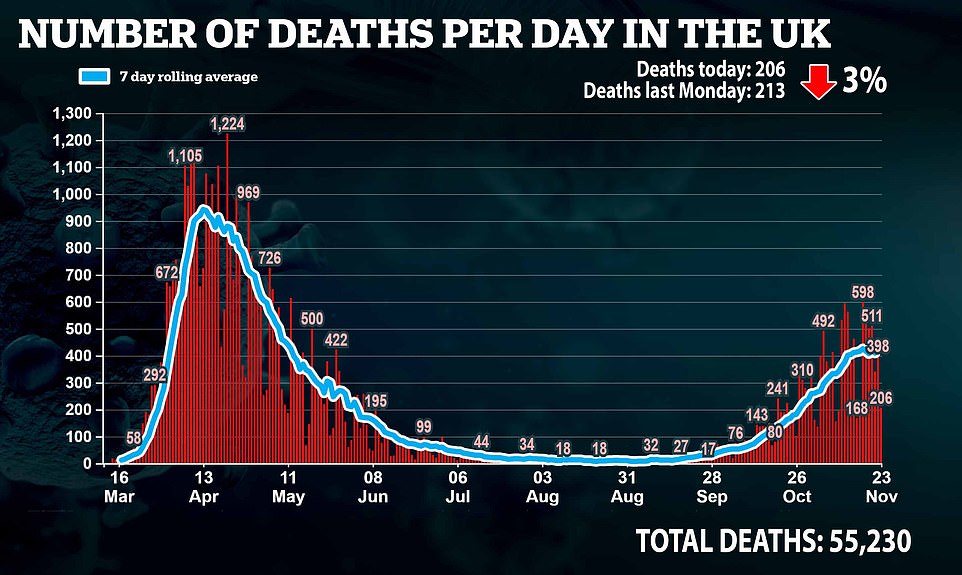 The deaths recorded in this week’s ONS release all happened between November 7 and November 13.

Because it generally takes between two and three weeks for Covid victims to die after they have caught the virus, this means that most of the coronavirus deaths in the update were people who got infected in the last week of October. 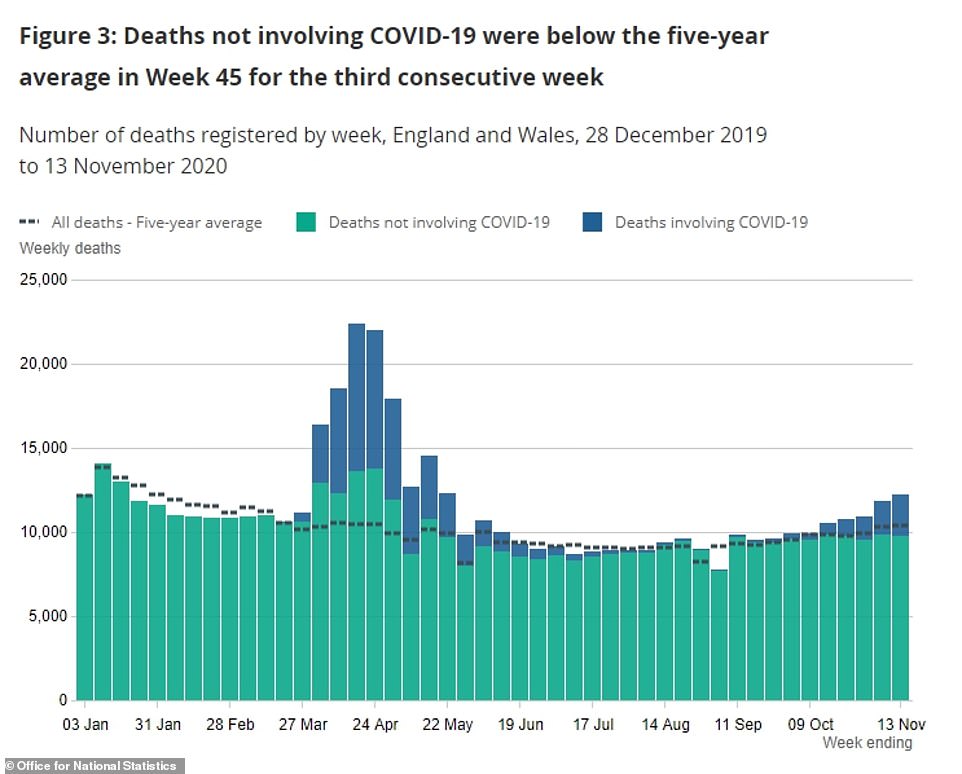 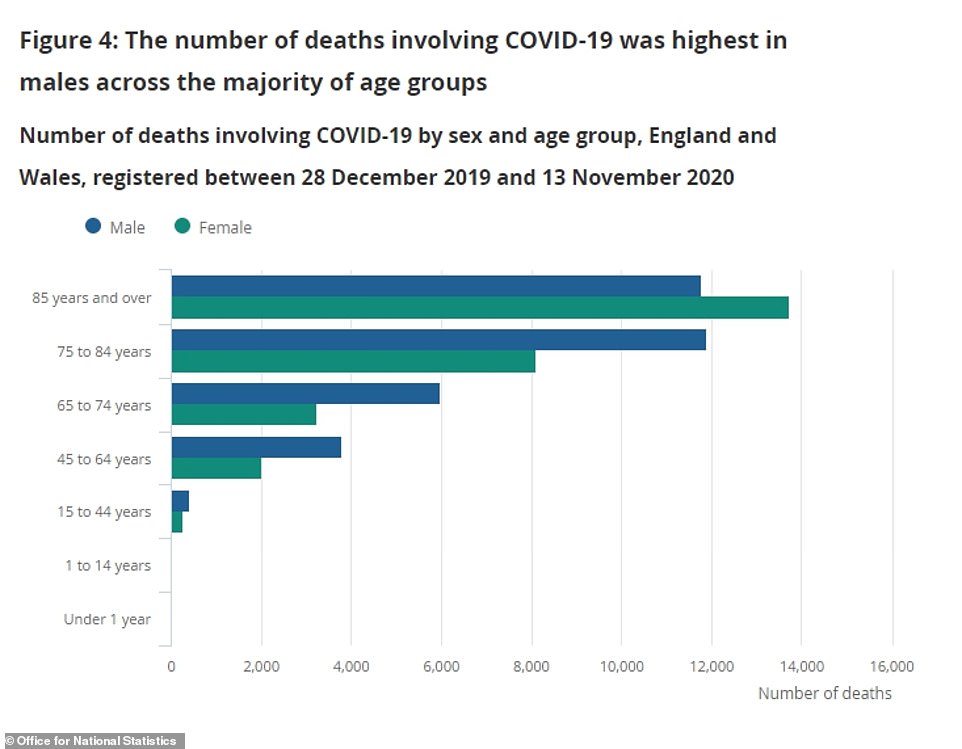 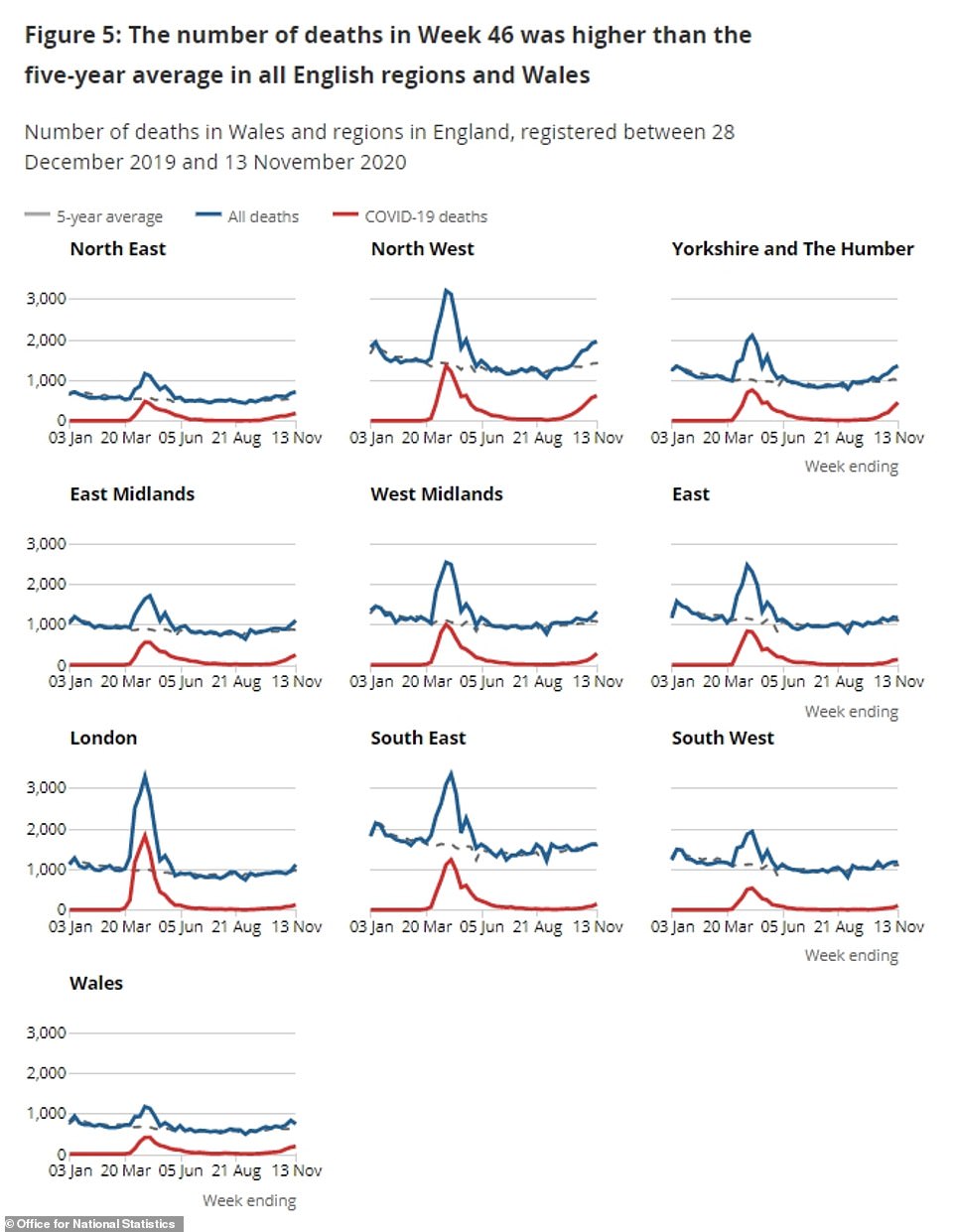 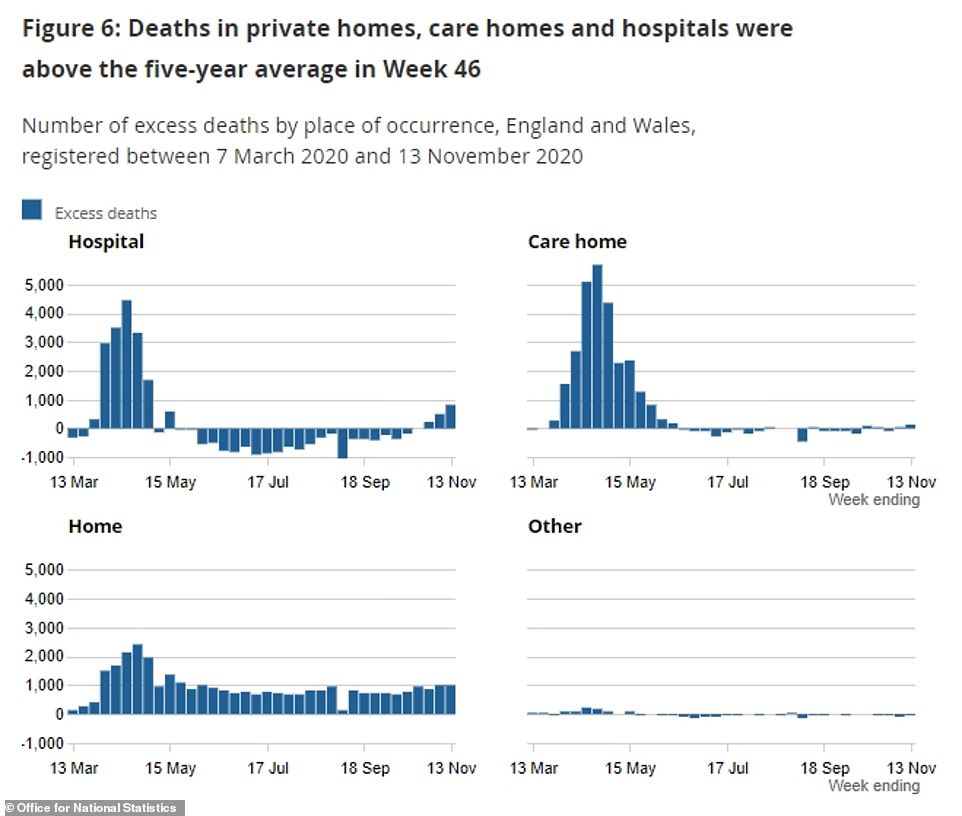 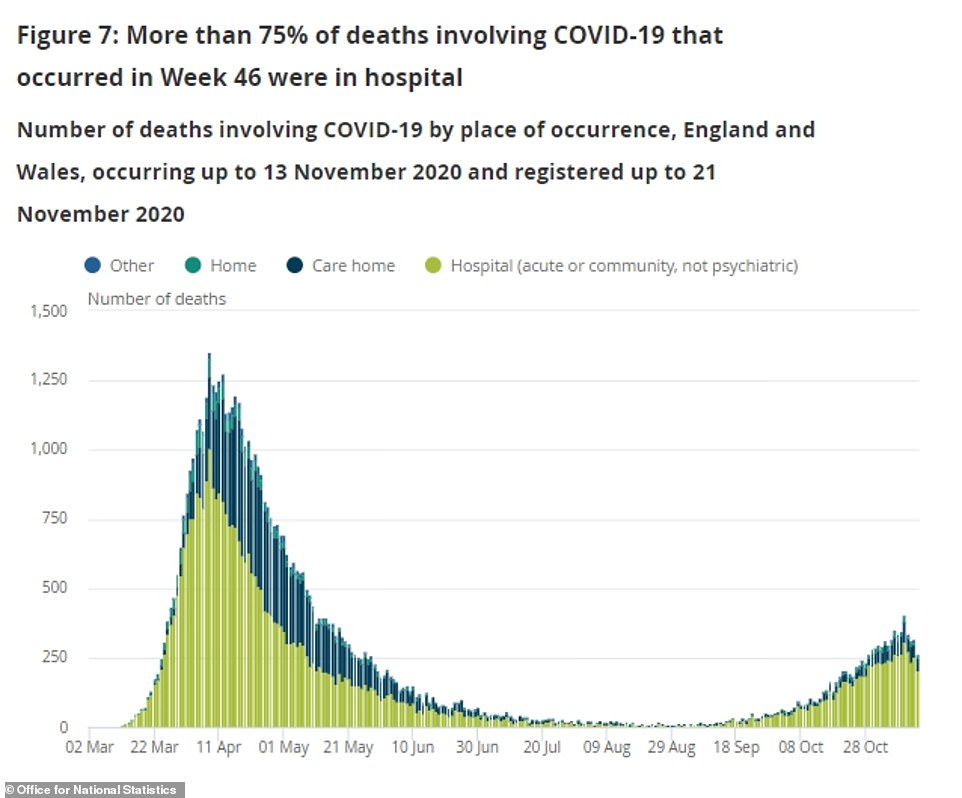 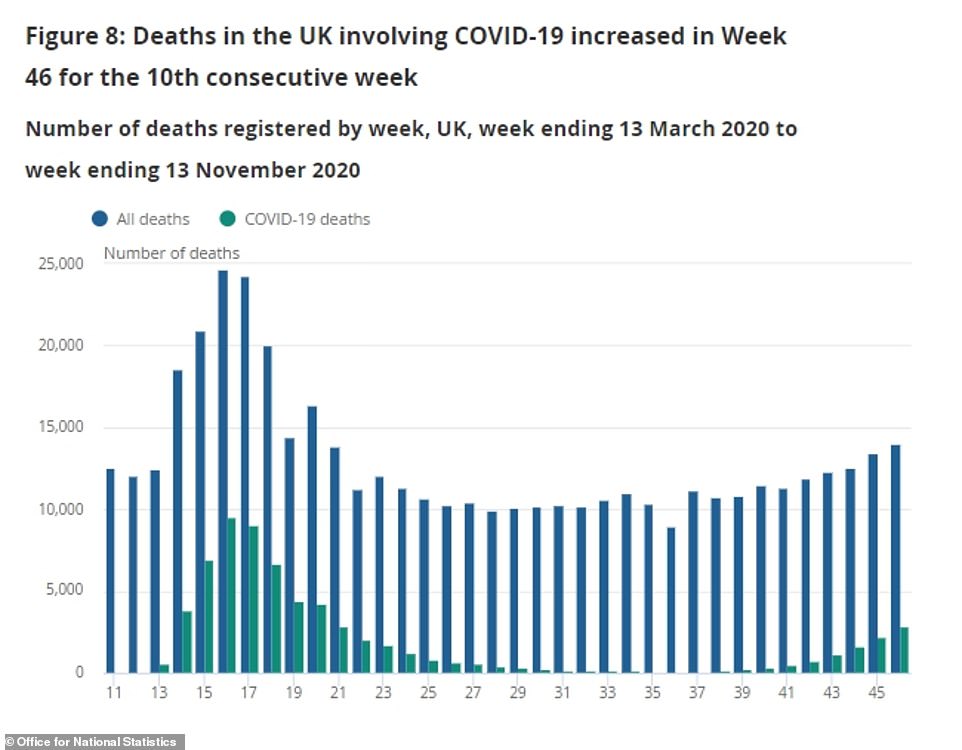