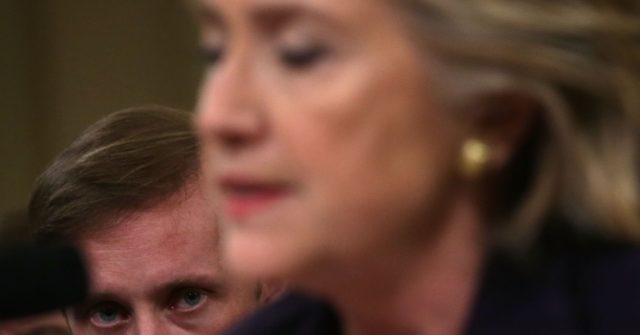 Jake Sullivan, whom Joe Biden has chosen to serve as his National Security Advisor, was deeply enmeshed in Hillary Clinton’s email scandal. He also launched negotiations with Iran, and later pushed the “Russia collusion” hoax to the media.

In a particularly cruel irony, Sullivan falsely accused former National Security Adviser Michael Flynn of collusion with the Russian government — and is now poised to take the job that Flynn lost, largely on the basis of similar false allegations.

Breitbart News reported in 2016 that Sullivan was under investigation as one of three Clinton aides who allegedly cut-and-pasted information out of emails with classified headings to allow the information to be included on her private email server.

Breitbart News also reported, citing Fox News, that Sullivan was one of at least a dozen individuals who had private email addresses on Clinton’s server, which handled classified information that some were not authorized to handle or share.

In October 2016, Breitbart News reported that Sullivan had been involved in an email communication with a Clinton Foundation employee, which might have established a conflict of interest for Clinton. The State Department lost the email.

In 2017, Sullivan admitted to congressional investigators that he had told reporters about his suspicions of “collusion” between the Trump campaign and Russia — a charge later shown to be without evidence — as well as Flynn’s involvement.

In one exchange with then-Ranking Member Rep. Adam Schiff (D-CA), Sullivan said that he “absolutely” believed Flynn was involved in a conspiracy with the Russian government, and accused him of violating the Logan Act.

MR. SCHIFF: I will be very quick. I was just going to ask you, given your expertise in foreign policy, about the factual basis for Mike Flynn’s plea, in that he admitted making false statements about a conversation he had with the Russian Ambassador on the subject of sanctions – and this was obviously not public, the Vice President misrepresented to the country that it never happened – would you view that as a form of conspiracy with the Russians to undermine the effective penalties imposed over their interference in our election?

MR. SULLIVAN: Absolutely. I mean, this was the American Government’s response to the Russian information warfare campaign. And what Flynn was saying to Kislyak was: We’ll help you undo this, or we won’t put it into place.

MR. SCHIFF: lt would also, would it not, violate, to your knowledge, the Logan Act?

MR. SULLIVAN: Yes. lf lwent out right now and started telling foreign officials, “Don’t worry, we’ll avoid some action the current government is taking,” that would be a violation of the Logan Act. And I think what Flynn did here – | mean, I’m not an attorney, but just on the face of what the purpose of this act is, what he did ran directly contrary to it.

MR. SCHIFF: And the underpinning of the Logan Act is that we should only have one government at a time, is it not?

MR. SCHIFF: And would that be particularly important during a transition period after an election in which a foreign adversary interfered in our election?

MR. SULLIVAN: lt would. And I would say doubly so when the interference in the election our lntelligence Community judged was in part to help one candidate win.

Sullivan also played a key role in talks with Iran. In 2013, the Associated Press reported that Sullivan had been meeting secretly with Iranian officials in Oman, even as President Barack Obama was promising a tough line on Iran in public. The ill-fated Iran deal was the result.