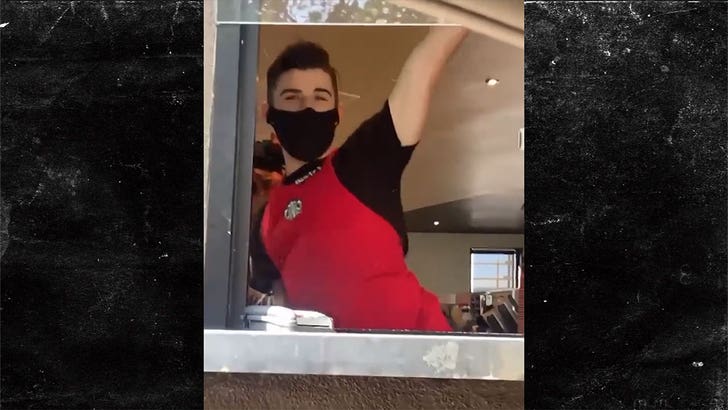 Megan Thee Stallion‘s “Body” challenge is taking the Internet by storm, but one take on her viral dance stood out above the rest … a Starbucks employee getting down!

MTS posted a video Tuesday of a guy named Hunter Gallagher doing her “Body” dance moves from her latest music video … and he did it from a Starbucks drive-thru window while he was on the clock and interacting with customers 😆.

Don’t worry, there’s no unprofessionalism here — the two women he was twerking it for were actually more than eager to see him put on a show. Apparently, as he was handing them their coffee (for free) — he told them to stream “Body” … and they one-upped him by having him do the #bodyodychallenge right then and there.

Hunter didn’t hesitate — he sprung right into action and showed off what he was working with, and it looks like he was well-prepared for this moment.

A few days ago, he posted his own vid of him doing the dance side-by-side with Meg from her video … and, as you can see, he’s been practicing. Meg and her choreographer, Jaquel Knight, caught wind of his Starbucks performance when it blew up online and reposted it.

Just goes to show, if you stay ready … ya never have to get ready.