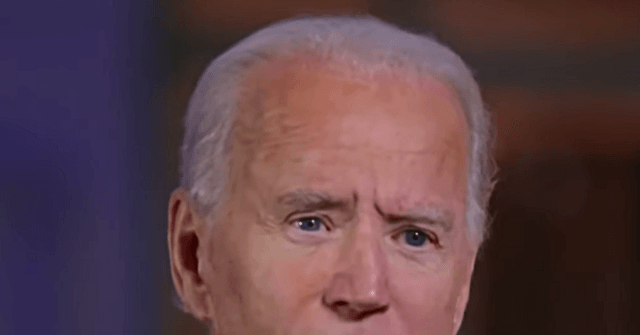 Democrat Joe Biden says he will send an amnesty deal for “over 11 million” illegal aliens to the United States Senate in his first 100 days in office.

During an interview with NBC News’s Lester Holt, Biden reiterated his plan to give amnesty to the roughly 11 to 22 million illegal aliens living in the U.S. Biden said of his agenda:

Some of it’s going to depend on the kind of cooperation I can or cannot get from the United States Congress. But I am going, I made a commitment, in the first 100 days, I will send an immigration bill to the United States Senate with a pathway to citizenship for over 11 million undocumented people in America.

Already, a number of Senate Republicans have suggested that they are interested in working with Biden on some sort of immigration deal. Senators Lindsey Graham (R-SC), John Cornyn (R-TX), and Chuck Grassley (R-IA) have all hinted at striking a Democrat-GOP deal on immigration that would almost certainly include an amnesty.

Currently, about 24.5 million Americans are either jobless or underemployed, but all want full-time jobs. Those unemployed are forced to compete in the labor market by an endless stream of foreign workers who secure visas and green cards that rack up to more than 2.5 million admissions every year.

These legal immigration admissions are in addition to the hundreds of thousands of illegal aliens who successfully cross U.S. borders and overstay their visas every year.

Exit polling after the election reveals that voters across party and racial lines overwhelmingly want less overall immigration to the U.S. More than 3-in-4 voters, for instance, said it is important to reduce immigration with continued high unemployment, and more than 62 percent said, even after unemployment has leveled off, immigration should remain lower than its current levels.