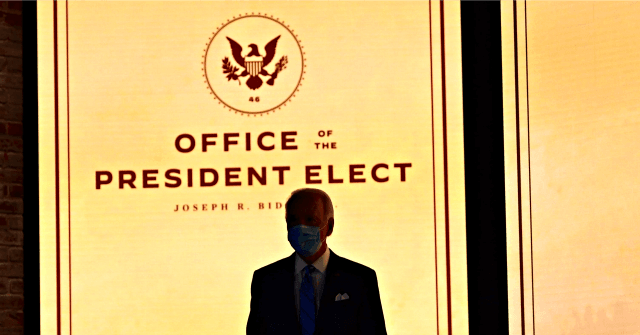 Biden, who has been declared president-elect by multiple media outlets and is in the process of planning his White House transition, spoke about the need for America to come together and unify amid a resurgence of the novel coronavirus pandemic. In his remarks, the former vice president not only urged citizens to take the virus seriously over the holidays, but also laid out an ambitious vision for what he hopes to accomplish after the outbreak recedes.

“This is our moment, ours together, to write a newer, bolder, more compassionate chapter in the life of the nation,” Biden said. “The work is not going to be easy, it will not be quick.”

Arguing that voters wanted “solutions, not shouting,” Biden said he was determined to bring together both Democrats and Republicans to ensure the 21st century was an “American century.”

“Americans dream big,” the former vice president said. “As hard as it may seem this Thanksgiving, we’re going to dream big again. Our future is bright.”

Biden added that he hoped his administration would lead to the United States once more becoming an innovative global leader on a number of fronts, including the environment and race.

“We’re going to build an economy that leads the world… we’re going to save this planet… find cures for cancer and Alzheimers and diabetes, I promise you,” he said. “We’re finally going to root out systemic racism in this country.”

“We’re gonna finally root out systemic racism…We can pushclaim [sic]. The palmist [sic]. With the palmist [sic] who wrote. These following words: ‘The Lord is my strength and my shield. And with my song I give thanks to him’…Our song shall be of lives saved.” @JoeBiden pic.twitter.com/cx46aggQdu

While running for the presidency this year, Biden attempted to paint the contest between himself and President Donald Trump as a “battle for the soul of the nation.”

Such attempts, however, were undercut by the former vice president’s own tumultuous history on the topic of race.