A restaurant CEO donated $60,000 to her employees in Kentucky one-day before the governor issued an executive order mandating the shutdown of all indoor dining to curb the resurgent spread of coronavirus.

Restaurants in Kentucky had to cease indoor dining as of 5 p.m. Friday and remain closed to on-site diners until Dec. 13, according to Gov. Andy Beshear’s order. He said the move along with other restrictions was necessary to clamp down on a surge in coronavirus cases, hospitalizations and deaths.

The governor said in a statement that restrictions did not constitute a “shutdown,” but were “surgical and targeted steps designed to slow the spread of the virus and protect our people.”

But Britney Miller, the CEO of Jeff Ruby Culinary Entertainment, which runs seven steakhouses in Kentucky, Tennessee and Ohio, said the governor’s order came without warning and with no unemployment plan in place.

The day before the ban, two of Miller’s steakhouses — one in Louisville and one in Lexington — announced that 100% of its sales would be donated to 160 employees.

Miller told Fox News that the restaurant has tried to keep as many employees as possible, but it had to furlough more than half after Friday. Although restaurants may continue offering takeout and delivery, Miller said restaurants rely on indoor dining to pay their bills. Furthermore, she said, outdoor dining is not practical. 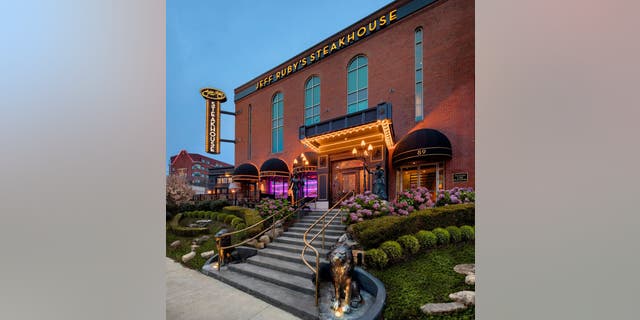 Jeff Ruby’s Steakhouse, one of seven locations in Kentucky, Ohio, and Tennessee.  (Provided)

“You really need to have people inside the building dining in order to keep the lights on and keep people working,” Miller said. “There’s just not a huge demand for carryout and delivery.

Miller lamented how restaurants bear the brunt of restrictions whenever there is a surge in coronavirus cases, citing experts who have said restaurants are not the super-spreaders that they are usually portrayed as.

“The problem we have too is that restaurants are not causing this spread. I’ve been told by health commissioners and epidemiologists that restaurants actually help offset people gathering,” she said. “You’re in a regulated environment. And we know the cause happening around here is happening at large gatherings, family gatherings. And so, it’s just frustrating. We’re being singled out.”

However, studies have suggested that bars and restaurants are significant contributors to the spread of the coronavirus. But such findings have been challenged by the National Restaurant Association, among other groups.

A September report issued by the Centers for Disease Control and Prevention suggested that in-person dining at restaurants where mask use and social distancing are difficult to maintain offers a greater risk of exposure than places like gyms or shopping centers.

“Masks cannot be effectively worn while eating and drinking, whereas shopping and numerous other indoor activities do not preclude mask use,” the report states, which suggests that on-site dining might pose “important risk factors associated with [COVID-19] infection.”

More recently, researchers from Stanford University, among other institutions, published a study in the journal Nature, which concluded that “on average across metro areas, full-service restaurants, gyms, hotels, cafes, religious organizations, and limited-service restaurants produced the largest predicted increases in infections when opened.”

The Nation Restaurant Association, however, has criticized such predictive modeling, telling Fox News that such studies are “fraught with error “due to the complexities of the real world.”

In a statement, the group said “absent contact tracing and public health data determining who among the groups actually contract the virus and without a higher level of specificity to where they contracted it, using a modeling exercise with anonymized location data pulled from mobile devices is not an acceptable way to determine that restaurants are a likely cause for virus transmission.”

Still, Miller noted the economic impact that blanket shutdowns are having on restaurants, adding that the industry employs 10% of the U.S. workforce – a figure that is doubled when accounting for ancillary businesses.

“Congress right now is dragging their feet. They need to put politics aside. We need both the Senate and the House to come together and to get negotiations started,” Miller said. “To not have any relief for employees right now, for people who do get furloughed or laid off and to not have any sort of unemployment plan in place for those folks – especially during the holidays – is heartbreaking.”