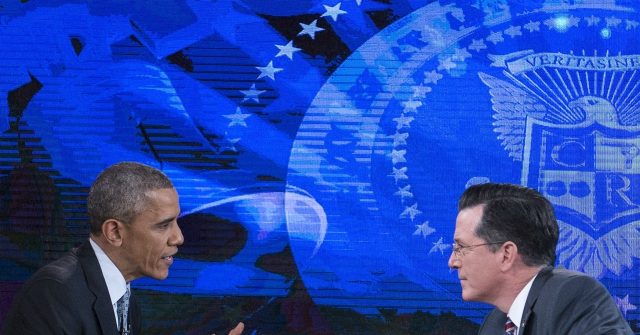 Barack Obama took his shots at President Trump during a gushing interview on The Late Show Tuesday as part of his ongoing promotional tour for his latest memoirs, A Promised Land. At one point, Stephen Colbert recalled fantasizing shortly after the 2016 election about all the ways President Trump could abuse the “dignity of the office” during his first term.

“Were you having a similar feeling in that moment?” Stephen Colbert asked. “Yeah. Yeah, it was a concern,” Obama replied. Colbert then asked if those concerns were “borne out,” to which Obama answered that they were “exceeded.”

During his appearance, Obama attacked the Trump administration, describing the administration’s coronavirus policy as “shambolic.”

“This would have been hard for anyone,” Obama said, but then proceeded to accuse the current administration of not heeding science, disrespecting Dr. Anthony Fauci, and not being consistent in terms of masks and social distancing.

In reality, Dr. Fauci himself hasn’t been consistent about masks, saying earlier this year that masks weren’t effective but then reversing his message. President Trump also implemented Operation Warp Speed, which has resulted in coronavirus vaccines that could be ready as early as December. Colbert didn’t challenge Obama on any of his points.

“Had we just taken those steps, there is no doubt we would have saved some lives, and ironically, the economy would be better,” Obama claimed.

The former president continued to take shots and President Trump and his administration, calling the last four years a “WWF constant cage match.”

“You couldn’t make up some of the stuff that you’re seeing,” Obama told Colbert. “And it is to the detriment of the country. But as you said. It runs contrary to what would have been smart politics if the Republicans wanted to maintain the White House.”

Colbert, as always, agreed: “A return to the stability and what’s that word — competency — of your eight years.”