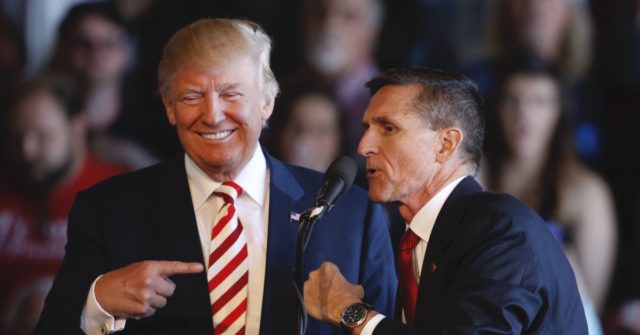 It is my Great Honor to announce that General Michael T. Flynn has been granted a Full Pardon. Congratulations to @GenFlynn and his wonderful family, I know you will now have a truly fantastic Thanksgiving!

Flynn pleaded guilty in December 2017 to lying to the FBI. He later withdrew his plea as exculpatory evidence emerged.

Flynn served in the U.S. Army for three decades. He also served as director of the Defense Intelligence Agency (DIA) under President Barack Obama. However, he felt Obama was not pursuing terrorists aggressively enough. He was eventually fired.

He saw an opportunity to advocate for his views in Donald Trump’s 2016 presidential campaign. A crowd favorite, Flynn was the warmup speaker for Trump on the campaign trail. When Trump won, he named Flynn his National Security Advisor. Flynn spent the transition planning an overhaul of national security strategy; his work continues to shape Trump’s policies.

The defeated campaign of former Secretary of State Hillary Clinton claimed that Russian interference had cost her the election. Senior Obama administration officials also told the media that they believed Trump had colluded with Russia. They identified Flynn as a potential link to Russian President Vladimir Putin, and warned Trump’s transition team about him.

During the transition, Flynn had conversations with then-Russian Ambassador Sergey Kislyak, among other foreign officials. Flynn urged Russia not to escalate its response to Obama administration sanctions for election interference, and explored the possibility that Russia might oppose an anti-Israel resolution at the UN Security Council that had Obama’s tacit blessing. These conversations were picked up by intelligence surveillance of the ambassador; they would later leak to the media, after officials — presumably, a senior official within the Obama administration — had “unmasked” Flynn’s name in the transcripts.

The FBI investigated Flynn, but found no evidence of any wrongdoing. The agency prepared to close the case, but senior officials decided to keep it open, ostensibly pursuing a theory that Flynn had violated the Logan Act, an obscure, centuries-old law that prohibits private citizens from conducting diplomacy, and which has never been prosecuted successfully.

In a fateful Oval Office meeting on Jan. 5, 2017, at which Obama’s senior national security officials were present, including then-Vice President Joe Biden, then-FBI Director James Comey discussed the investigation of Flynn. According to a memo later written by outgoing National Security Advisor Susan Rice, Obama told Comey to proceed with inquiries “by the book.” There is some dispute as to whether Biden suggested or discussed the possibility of using the Logan Act as a pretext.

Later that month, after Flynn had taken up his position at the White House, Comey sent FBI agents to interview him there, advising him not to bring counsel. Notes suppressed by the FBI but later revealed indicated that the FBI agents had discussed whether their purpose was to have him fired, or prosecuted. Flynn was not told that he was being investigated. He was asked about his conversations with the Russian ambassador. Agents later reported that they did not believe he was lying to them.

However, after the contents of the surveillance intercepts were leaked to the Washington Post, Flynn was accused of having lied, both to the FBI and to Vice President Mike Pence, who had defended Flynn several weeks before. By the second week of February, Flynn was forced to resign. He was later prosecuted by Special Counsel Robert Mueller as part of the inquiry into alleged “Russia collusion.” Flynn accepted a plea deal that required him to cooperate with the investigation, which he did; it later emerged that prosecutors had also pressured Flynn, ostensibly by threatening to prosecute his son as well.

Flynn’s sentencing was delayed while he continued cooperating with Mueller. But details of problems within the Mueller investigation began to emerge, such as the deep anti-Trump bias of senior FBI agent Peter Strzok. In a sentencing hearing, Judge Emmet G. Sullivan asked Flynn wished to withdraw his plea; Flynn declined. Sullivan had to apologize to Flynn after accusing him of betraying his country, apparently believing — incorrectly — that Flynn was accused of being a foreign agent.

Soon, however, Flynn obtained new defense counsel, replacing his lawyers from Covington & Burling with Sidney Powell. She believed that he had been framed, and portrayed him as a victim of a conspiracy by the outgoing Obama administration.

Flynn withdrew his guilty plea. Meanwhile, William Barr, who had taken over as Attorney General, prodded Mueller to release his findings. In March 2019, Barr revealed that Mueller had found no evidence whatsoever of “Russia collusion.”

Barr also brought in U.S. Attorney Jeffrey Jensen to review the prosecution’s behavior in the Flynn case. Jensen found several irregularities, including exculpatory evidence that had not been provided to the evidence as required by law.

The Department of Justice soon asked to drop the prosecution. But Judge Sullivan refused. He suggested that Flynn might be prosecuted for criminal contempt of court for initially pleading guilty, and invited amicus briefs to make that argument. He also appointed retired Judge John Gleason, who had already publicly alleged a political conspiracy in the DOJ, to file a brief.

Powell, on Flynn’s behalf, appealed to the D.C. Circuit Court of Appeals for a writ of mandamus to force Judge Sullivan to drop the case. In a 2-1 decision, a panel of the court agreed. But Sullivan appealed the decision to an en banc hearing of the entire court, and the earlier decision was overturned. The case returned to the trial court, where it still remains today. Judge Sullivan was accused of “prosecutor shopping,” waiting for a new administration to appoint new prosecutors to the case.

Many pundits on the left clung to the belief that Flynn was guilty, or that he was the beneficiary of political interference by Trump in the DOJ. On the right, however, Flynn was seen as an innocent man framed as part of the Democrats’ vendetta.

One of those who falsely accused Flynn was none other than Jake Sullivan, whom Joe Biden has named as his National Security Adviser. Having smeared Flynn with false allegations of Russia collusion, Sullivan stands ready to take his job.

Flynn’s finances were ruined by the prosecution, as well as his opportunity to serve in the Trump administration. He has, until now, been relatively silent about his opinions. On Wednesday, Flynn appeared to react to the pardon with a Bible verse:

It was not the exoneration Flynn might have wanted, nor will it make him whole, or silence his critics, or restore faith in the justice system. But to millions of Americans, Flynn’s pardon is, at long last, the least he deserved.