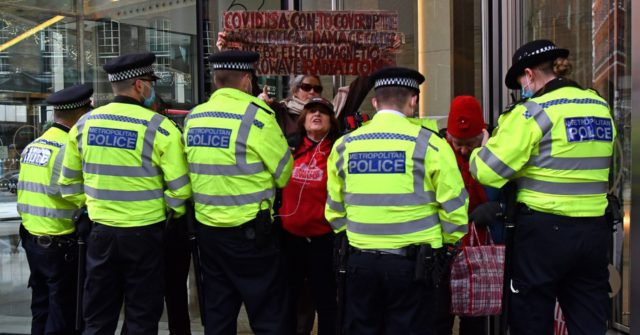 A Member of Parliament from the ruling Conservative Party was seen shouting, “You don’t need to obey an illegal order!” at police as they arrested an elderly woman at a peaceful anti-lockdown protest in London on Tuesday.

Metropolitan Police were filmed hauling the elderly woman “spread eagle” into the back of a police van, arresting her for alleged breaches of the Chinese coronavirus restrictions. Shocked at what he was witnessing, Sir Charles Walker MP shouted at the officers, calling their actions an “absolute disgrace”.

Following the arrest, the Tory MP took to the House of Commons to implore Prime Minister Boris Johnson to put an end to the “unconstitutional” and “un-British” restrictions on the right to protest.

“She was an old lady robbed of her dignity for having the courage to protest about having her fundamental rights and those of my constituents and others removed,” Sir Charles said.

“This is a disgrace. This is un-British. It is unconstitutional and this government, our prime minister, needs to end these injustices now,” the Conservative MP demanded.

MP Charles Walker fuming as elderly protester bundled into the back of a police van outside Parliament pic.twitter.com/kkXl2gkCcv

Speaking to The Telegraph, Sir Charles went on to say of the incident: “It’s not what they’re protesting about, I’m not an anti-vaxxer, it’s their right to protest, the right not to give their name and addresses — they’re not violent, they’re just a bunch of people.”

“I suspect she’s a great British eccentric and I watched from up here in the House, her holding onto the railings and not wanting to corporate,” he added.

“It’s just nonsense, how can two people fail to disperse? The police are happy that they’ve followed the law, but the law is rotten,” the Conservative MP concluded.

Overzealous policing of anti-lockdown protesters is nothing new in the British capital. Since the beginning of the protest movement in the UK, the police have consistently clamped down on anti-shutdown demonstrations, while appearing to take a comparatively hands-off approach to leftist movements, such as Black Lives Matter.

At the last major rally against the lockdown in London earlier this month, police arrested 190 peaceful activists for supposed breaches of the coronavirus restrictions.

Police threatened journalists with arrest during the demonstration and officers were even seen threatening to arrest a man dressed as Santa Claus. Again, this is nothing new, as officers threatened Breitbart News’s James Delingpole with arrest for reporting at a lockdown protest in May.

Commenting on the arrest of the elderly woman, a spokesman for the Metropolitan Police said: “A group had come together to protest. Police engaged with those present and explained the current restrictions around gatherings of more than two people.”

“Two women refused to engage and were subsequently arrested for breaching the coronavirus restrictions. A short while later part of the group had re-gathered outside the Palace of Westminster.

“A third woman refused to comply, was arrested for breaching the coronavirus restrictions and then became uncooperative with officers. She was taken by police transport to custody,” the spokesman concluded.

Former Brexit MEP Martin Daubney joined Charles Walker in condemning the police, who he described as “COVID-1984 boot boys”, and lamented that the incident was a signal of how quickly the United Kingdom has “slipped into authoritarianism”, adding: “Sad, sad times.”

Watch: ‘Shove Your New World Order Up Your *ss!’ — London Erupts in Protest Against Lockdown https://t.co/fXW9rIjHy8