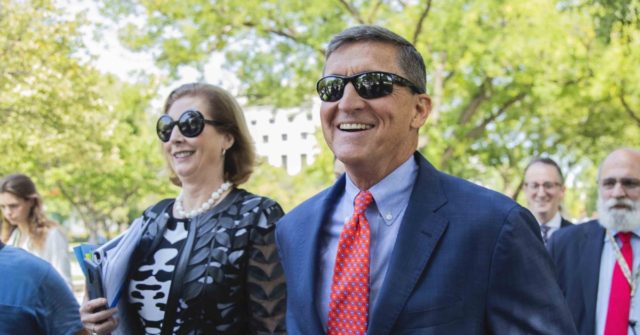 Former National Security Advisor Lt. Gen. Michael Flynn (Ret.) released a statement today, shortly after being pardoned by President Trump. Flynn was targeted by the outgoing Obama administration on charges of “Russia collusion,” and pleaded guilty to lying to the FBI when put under pressure. He withdrew his plea when further evidence was revealed. Under the Trump administration, the Department of Justice sought to drop all charges, but the judge refused to do so.

Today, Flynn tweeted a link to a statement on UncoverDC.com in which he thanked his friends, family, and “every single patriot who circled me with their prayers, wisdom, and kindness.” Flynn’s tweet can be seen below:

In his statement, Flynn wrote:

Never again should any family or individual be so viciously targeted, maligned, smeared, and threatened such has been the experience of my family and I. Not you and your loved ones, not me nor President Trump, our First Lady, and the Trump children. Stand with me today in renouncing this betrayal of trust that has burdened our nation and proclaim with one united voice across this land that we will never again allow the rightful power of the citizens of this country to be uprooted, undercut, usurped, or held hostage by a coup against our nation, a duly elected President or any future president of these United States.

For over three decades, it has been my honor and privilege as a Soldier and public servant to fight for the rights of American citizens and for citizens of the world. I have fought alongside the bravest men and women on distant battlefields in the midst of the fire and fury of war. In this fight for my life and liberties on the battlefield of justice and truth, my faith in God and the love and support of my wife Lori have seen me through.

Along our journey together, we have been blessed to have the trust and support of millions of Americans across our great country and around the world. These are our Digital Army of Patriots who inspired us to keep fighting, uncovered secrets we would otherwise have not known, and shared with us their thoughts, dreams, and wisdom throughout this ordeal.

Breitbart News recently reported that, in a tweet, President Trump wished Flynn a “great life” and hoped that his family had a “truly fantastic Thanksgiving.”