Iconic singer and actress Cher is in Pakistan to celebrate the departure of Kaavan, dubbed the “world’s loneliest elephant,” who will soon leave a Pakistani zoo for better conditions after years of lobbying by animal rights groups and activists.

Because of security concerns, Cher’s schedule was not made public. However, she met Friday with Prime Minister Imran Khan and was expected to visit Kaavan later in the trip, according to the prime minister’s office. Khan’s office released a video of the singer sitting with the prime minister outside on the expansive grounds of Khan’s residence.

Kaavan is set to leave for a sanctuary in Cambodia on Sunday, said Martin Bauer, spokesman for Four Paws International, a global animal welfare group that’s led the charge to save Kaavan since 2016.

The animal has languished in the zoo for 35 years, most of those years in chains, and lost his partner in 2012. She died after an infection turned gangrenous and her body lay beside Kaavan for several days before being removed, said Dr. Amir Khalil, veterinarian with Four Paws. Khalil said Kaavan was heartbroken after his partner died.

Activists dubbed Kaavan the “world’s loneliest elephant” after his plight gained international attention and the unhappy elephant was diagnosed as emotionally as well as physically damaged.

Khalil has treated the elephant’s many wounds and ailments over the past three months. Kaavan has been diagnosed by veterinarians as both overweight and malnourished, and also suffers behavioral issues due to his isolation.

Cher took up Kaavan’s cause and has been a loud voice advocating for his resettlement. Four Paws, which often carries out animal rescue missions, will accompany Kaavan to the sanctuary.

In a tweet following her meeting with Pakistan’s prime minister, Cher said she thanked Khan “for making it possible for me to take Kaavan to Cambodia.” She tweeted she was making a documentary on Kaavan and said, “think documentary will be heartwarming.”

Even after he’s in Cambodia, Kaavan will require years of physical and even psychological assistance, Bauer said.

Because of the abysmal living conditions blamed on systemic negligence, Pakistan’s high court in May ordered the closure of Marghazar Zoo in the capital of Islamabad, where Kaavan has lived for much of his life.

A medical examination in September showed Kaavan’s nails were cracked and overgrown — the result of years of living in an improper enclosure with flooring that damaged his feet.

The elephant has also developed behaviors including shaking his head back and forth for hours, which the medical team of wildlife veterinarians and experts blamed on his utter boredom.

For the past three months, a Four Paws team including veterinarian Khalil and the Islamabad Wildlife Management Board have been readying Kaavan to leave. 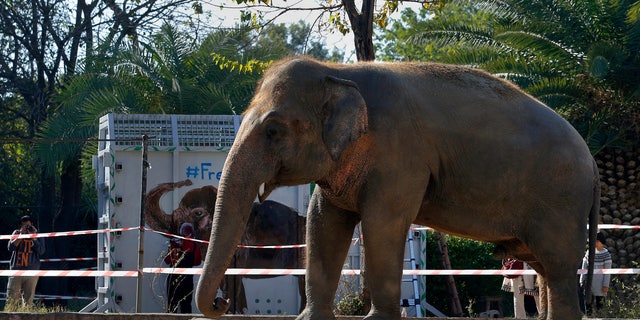 A photographer takes a picture of an elephant named “Kaavan” waiting to be transported to a sanctuary in Cambodia, at the Maragzar Zoo in Islamabad, Pakistan. (AP Photo/Anjum Naveed)

Khalil first met Kaavan in 2016 and returned to the zoo in August, where he was saddened by the animal’s condition. Khalil has spent the last three months trying to get him ready for his trip to Cambodia.

The veterinarian said this was the first time in 30 years that he developed a strong emotional bond with a rescue animal. Now, the “world’s loneliest elephant” comes lumbering over when he hears Khalil’s voice.’

“I was always moving, so never allowed myself to develop an emotional attachment,” but with Kaavan he couldn’t resist, Khalil said. He said he has pampered and protected him for the past three months, cajoling him into losing weight as well as being less fidgety and more relaxed so he can make the trip to Cambodia.

Khalil said there are many elephants at the sanctuary, but in particular three female elephants are awaiting Kaavan’s arrival. Khalil joked that Kaavan might just find a girlfriend there.

Bauer lauded the powerful impact celebrity voices can have for animal rights.

“Celebrities lending their voices to good causes are always welcomed, as they help starting public discourse and raising pressure on responsible authorities,” he said.