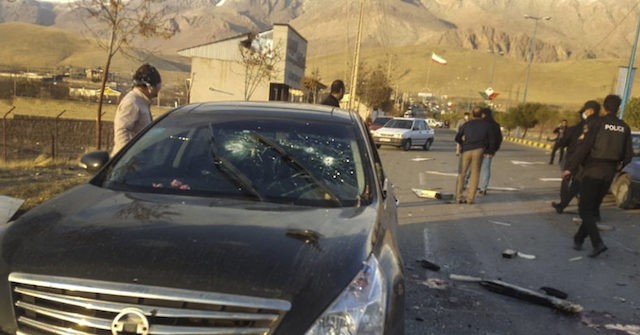 Iranian state media reported on Friday morning that top nuclear scientist Mohsen Fakhrizadeh was assassinated near the capital city of Tehran by unidentified “terrorists” after a fierce battle with his security team.

Fakhrizadeh was described as the “father of the Iranian bomb” in a famous 2018 presentation by Israeli Prime Minister Benjamin Netanyahu.

Iran’s Tasnim news agency quoted a statement from the Defense Ministry that said “armed terrorist elements” attacked Fakhrizadeh’s car on Friday, severely wounding him during a firefight with his bodyguards.

According to Tasnim, the injured nuclear scientist was taken to a hospital, where “efforts by the medial teams to resuscitate the Iranian scientist failed and he was martyred.”

Tasnim reported explosives were used in the attack and “a number of people have been killed in the incident,” possibly including relatives of Fakhrizadeh who were traveling with him.

“Eyewitness accounts confirmed that Fakhrizadeh’s car came under attack first by a blast and then by two terrorist teams who sprayed bullets at his car as they moving in opposite directions. Eyewitnesses also said three to four individuals, most likely all terrorists, have been killed in the attack,” Fars reported, stating that at least two other dead bodies were spotted at the hospital.

“Terrorists murdered an eminent Iranian scientist today. This cowardice – with serious indications of an Israeli role – shows the desperate warmongering of the perpetrators,” Zarif said on Twitter.