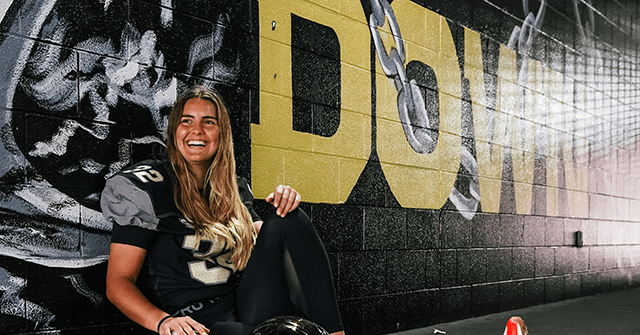 Vanderbilt kicker Sarah Fuller will suit up on Saturday against Missouri, in a move that could make her the first woman to play in a Power 5 football game. Fuller was added to the roster this week.

“It’s an honor they called on me to be able to do this and help them out,” Fuller, a senior goalkeeper on Vanderbilt’s SEC championship soccer team, said.

Fuller’s helmet will sport a sticker that reads, “Play Like a Girl.”

I think it’s amazing and incredible. … But I’m also trying to separate that because I know this is a job I need to do and I want to help the team out and I want to do the best that I can. Placing that historical aspect aside just helps me focus in on what I need to do. I don’t want to let them down in any way.

Vanderbilt head coach Derek Mason said on Wednesday, “Right now, we’re just looking at all options. … For us, talking to Sarah, she’s a champ, and no pun intended. Just coming off an SEC Championship in soccer… She’s a complete competitor. She’s an option for us. Right now, that’s where we sit.

“For us, every week is [about] getting to the practice field and about making sure that we put the best possible kicker out there, so we’re competing,” Mason said.

Two other women, Katie Hnida of New Mexico and April Goss of Kent State, have played football at the FBS level. The Power 5 conferences consist of teams from the SEC, ACC, Big 10, Big 12, and Pac 12. Vanderbilt is a member of the SEC.