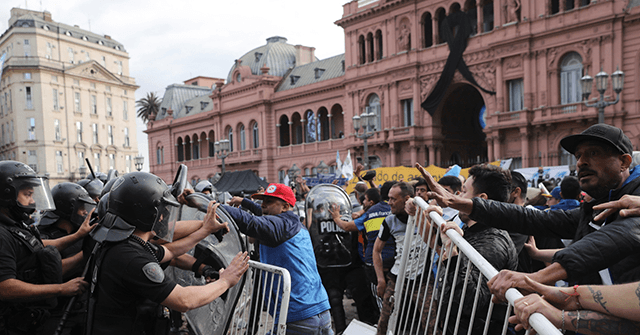 Police and mourners clashed in Buenos Aires on Thursday at the funeral of soccer star Diego Armando Maradona as thousands of people physically competed to pay their respects.

According to local media, thousands of people wishing to pay tribute to the 60-year-old Argentine were told to join the queue outside the Casa Rosada presidential palace. Officials had scheduled the wake to last ten hours, with the first two hours reserved for Maradona’s family.

The atmosphere quickly turned sour after the number of mourners began to swell and authorities became concerned about widespread Chinese coronavirus contagion, prompting the arrival of police in riot gear. As they failed to contain the situation, security forces deployed water cannons and tear gas in an unsuccessful attempt to break it up.

Argentine news network Infobae reported that, at around 3 p.m., frustrated fans managed to break down the fences at the entrance to the Casa Rosada, although this did not give them direct access to his coffin, which was behind another fence.

As a precaution, officials were forced to move the coffin to another location, as well as removing his ex-wife Claudia Villafañe and his daughters Dalma and Giannina from the hall. At one point, President Alberto Fernández leaned out his office window to plead with the crowd for calm.

Several people were reportedly left injured during the clashes, including one member of the Casa Rosada security team who suffered a serious cut to the forehead. The clashes led the hashtag #VerguenzaNacional (#NationalShame) to trend on Twitter, as Argentines expressed their dismay at the mayhem of what was intended to be a somber event.

Maradona’s funeral began less than 24 hours after his death was announced on Wednesday, only a few weeks after he underwent brain surgery. Widely regarded as one of the greatest soccer players of all time, Maradona played for several clubs including Boca Juniors, Napoli, and Barcelona.

He also played an integral role in the Argentine national team winning the FIFA World Cup in 1986, where he infamously cheated against England by scoring a goal with his hand. The goal consequently secured his country’s victory and a place in the final. When confronted about using his hands in soccer, which the rules prohibit, Maradona infamously claimed it was not his hand that people saw, but the “hand of God.”

Following his retirement in 1997, Maradona went on to manage various clubs, including the Argentinian national team, although during this period he also descended into alcoholism and drug addiction, habits that undoubtedly played a factor in his declining health.

A fervent socialist who had grown up in the slums of Buenos Aires, he also became involved in politics, lending his support to left-wing dictators such as Venezuela’s Nicolás Maduro and Cuba’s Fidel Castro. He tattooed his body with the face of Argentine Marxist mass murderer Ernesto “Che” Guevara. He was also no fan of the United States, once wearing a Nazi Swastika in an attempt to condemn President George W. Bush.

Maradona’s lawyer Matias Morla on Thursday pledged to investigate the circumstances surrounding his client’s death following reports that he was left alone for 12 hours.

“It is inexplicable that for 12 hours my friend has had no attention or check-up from the personnel dedicated to these ends,” he wrote on Twitter. “The ambulance took more than half an hour to arrive, which was a criminal idiocy.”

Maradona is to be buried at the Jardines de Bella Vista cemetery on the outskirts of Buenos Aires, the same place his parents were also laid to rest.