President Trump took offense during a Thursday news conference when a reporter balked at his claim of voter fraud during the Nov. 3 election.

Prior to the outburst, Trump had been claiming that election results showed Democrat Joe Biden “losing to Obama all over the place” in noncompetitive states, meaning the former vice president had failed to match the election performance of his boss.

And yet, Trump claimed, Biden’s vote totals surpassed those of Obama “in areas that mattered in terms of the election – in swing states.”

The president’s insinuation was that Biden’s vote totals in battleground states may have been manipulated.

“This election was a fraud,” the president concluded at one point.

The reporter who drew the president’s ire was identified as Jeff Mason from Reuters, according to the Huffington Post.

The exchange began when Mason asked the president if he would concede if the Electoral College votes in favor of Biden.

“Well, if they do, they made a mistake, because this election was a fraud,” the president responded. 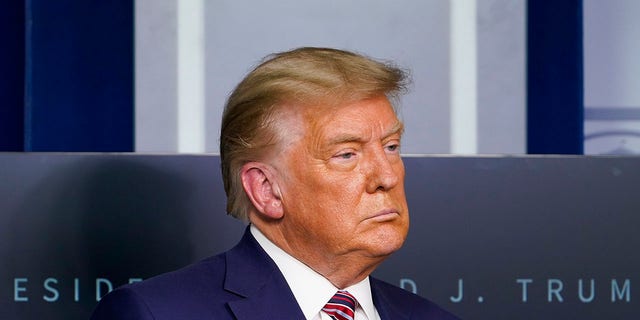 FILE – In this Nov. 20, 2020, file photo President Donald Trump listens during a news conference in the briefing room at the White House in Washington. (AP Photo/Susan Walsh, File)

Trump had at least one previous confrontation with Mason, according to Mediaite. It occurred in October when Mason was wearing a face mask inside the Oval Office.

“This is Jeff Mason,” Trump said to Israeli Prime Minister Benjamin Netanyahu, the outlet reported. “He’s got a mask on that’s the largest mask I think I’ve ever seen. So I don’t know if you can hear him.”

The president has called out Mason for wearing a mask in the past as well, in addition to sparring with him on other issues.