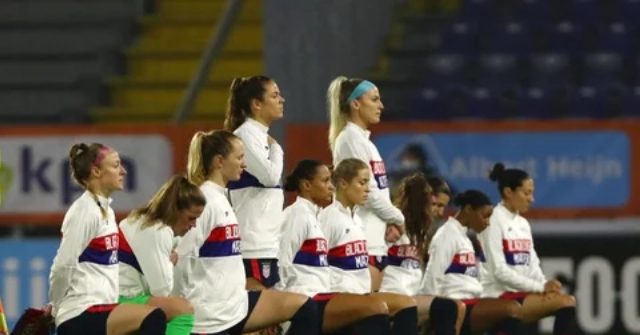 In a message posted before the game, USWNT star Alex Morgan said the team chose to wear the jackets as a way to “affirm human decency,” and as a stand against “racial injustice and police brutality.”

“We love our country, and it is a true honor to represent America,” Morgan wrote. “It is also our duty to demand that the liberties and freedoms that our country was founded on extend to everyone.”

The Twitter account for the U.S. Women’s National Team posted a video supporting the team’s decision to wear the jackets. However, they stressed that the move was “a statement on human rights,” and “not political.”

We wear Black Lives Matter to affirm human decency. This is not political, it’s a statement on human rights. pic.twitter.com/QHDAx4iv7k

USWNT members took a knee before the start of the game, as they have at many international friendly’s and tournaments over the years.

The team gained notoriety during the 2019 Women’s World Cup for frequent and profane statements against President Trump. Perhaps most outspoken of the USWNT stars was co-captain and leading scorer Megan Rapinoe, who said she was not going to the f*ck*ng White House” to visit President Trump if the USWNT won the tournament. She also once said that “We have a white nationalist – I think – in the White House.”

The U.S. Soccer Federation imposed a ban on anthem protests after Rapinoe chose to kneel during the anthem in 2016. However, they reversed the ban in June of this year.