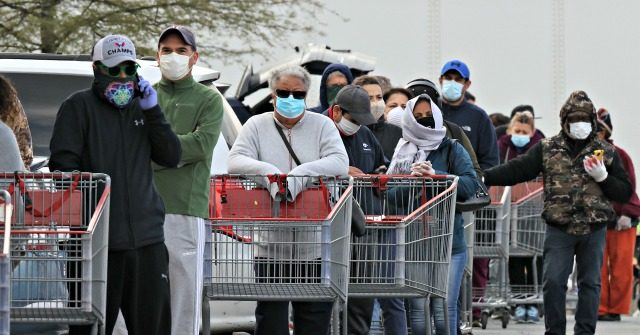 Martinez, a former U.S. Senate candidate and Trump campaign surrogate, said that there has been a lot of downward pressure on the economy and people of New Mexico due to “ridiculous mandates” pushed by the governor, imposing some of the “strictest lockdowns” in the country. Martinez discussed the governor’s “abrupt” November 13 announcement, which put residents under another lockdown, closing businesses deemed nonessential.

The lockdown, which went into effect November 16, created a “huge rush to all of the stores,” which Martinez said was “very counterintuitive if the idea is to stop the in-person contact.”

The governor ultimately capped capacity in retail stores to 75 people, regardless of size.

“So now we’re experiencing 2-4 hour lines outside in the cold — some areas of the state it’s snowing, raining,” she said.

“I had an elderly woman contact me. She was waiting in line for two hours to get their meds — to get their, you know, essential medicine. So it’s making a public health emergency worse in my opinion for the people of New Mexico, especially leading up to Thanksgiving,” she said:

Across the state, the elderly & sick are in these lines.

Don’t be so naive to think that government & @GovMLG is interested in your health & well being.

Or “science” for that matter.

If that were the case this wouldn’t be happening..

Taking away protected rights, forcing citizens to stand in “bread lines” & LYING about it—are all the actions of communist dictators.

NM has experienced these under @GovMLG’s “emergency orders.”

Tell your state legislators to vote FOR the Emergency Powers Accountability Act.

In addition to outdoor breadlines, Biden’s potential HEALTH SECRETARY @GovMLG has created a public health disaster in New Mexico. #NMpol Where is the media? https://t.co/ku8vTanUJJ

The issues were further compounded, she said, “by the fact that she also declared that if you have four rapid response coronavirus tests that came back in one of these essential businesses, that the whole business, the whole store, had to shut down.”

That resulted in at least 12 stores across the state closing “in these smaller communities.” She added that it is “all up to the whims of the governor to declare what is essential and not.”

Lujan Grisham’s order ultimately put pressure on mom and pop stores, she continued, explaining that Democrat governors are “enriching corporate empires like Amazon and Walmart.” All the while, Hollywood productions are allowed to take place in the state.

“We have video of an actual production crew at work here in the state that took place after the lockdown orders. And my understanding is that there’s a special agreement that the film industry gets to operate outside of the public health order based on their own agreement with unions. It’s really a slap in the face to the people of New Mexico who are truly struggling, who are waiting outside in these lines,” she said.

The “fearmongering about this virus never stops from the governor, but the film industry, somehow, is exempt from the virus and exempt from the lockdown order,” Martinez said, adding that the hypocrisy is “off the charts” in the state.

Lujan Grisham’s office responded to the backlash by proclaiming that the state is “not forcing anyone to stand in a crowded line.” A spokesperson for the governor added that the chatter over the long lines is nothing more than a “Republican talking point.”